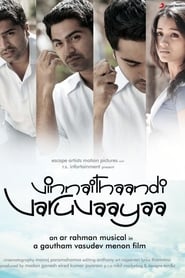 At a Keralite Christian wedding, a young man in the audience watches mournfully as the woman of his dreams walks down the aisle. Flashback, a young wannabe filmmaker Kartik (Simbu) shares a house with a Keralite family, whose daughter Jessie (Trisha) he instantly falls in love with. After a few minor spurns, Kartik chases Jessie to her hometown and gradually begin a relationship. Trouble brews when her family finds out, leading to fist-cuffs, and Jessie's father fixing her marriage with a boy within the community. The couple continue to meet, but as his filmmaking career starts to take off, there is new friction in their relationship and a drastic step from Jessie. Written by Joyojeet Pal

At a Keralite Christian wedding, a young man in the audience watches mournfully as the woman of his dreams walks down the aisle. Flashback, a young wannabe filmmaker Kartik (Simbu) shares a house with a Keralite family, whose daughter Jessie (Trisha) he instantly falls in love with. After a few minor spurns, Kartik chases Jessie to her hometown and gradually begin a relationship. Trouble brews when her family finds out, leading to fist-cuffs, and Jessie's father fixing her marriage with a boy within the community. The couple continue to meet, but as his filmmaking career starts to take off, there is new friction in their relationship and a drastic step from Jessie. Written by Joyojeet Pal

Well frankly saying it is a ten year wait to watch a full length romantic movie after ALAIPAYUTHE being released. Great work Gautam,the movie is very close to heart with no added ingredients.The movie is pure and simple, and the narration is excellent. It may not be the usual stuff with comedy and fights, but still its worth a watch more than once. The lead pair is terrific, with Simbu in a new avatar, a territory which he has never charted. Trisha is amazing as Jessie, many will fall in love for her after this movie. Definitely, this move can be one of their best performance till date. ARR is amazing as usual, the BGM and the songs are awesome. At many part u would be dragged into the movie unknowingly.Of course the movie has other routine Gautam stuff. Though it may not be convincing to everyone, but still all those who watch the movie will have one moment in the movie which will be close to them, if that is so then, the mission of the director is achieved. I would recommend this movie for all you people who waited for a romantic piece. A final word, Gautam should we wait for another 10 years for another romantic movie?

I can very well vouch that movie is one of such kind that will stay in one's heart forever... This is one such a simple/clean/decent love story that can happen in anyone's life... And that makes the movie stay close to one's heart... Gautham has splendidly done the screenplay... One can taste the sweetness/bitterness of love while ht movie flows...

The actors, Simbu and Trisha.... My god, they haven't acted, but lived as Karthik, Jessie... Such a brilliant performance...

The director concentrated more on the story, story and nothing but story... A simple, but a powerful one... Though there are very few locations, the camera man caught it well...

On the whole, it's a nice movie to be enjoyed...

Vinnai Thaandi Varuvaayaa(shortly "VTV")created a big buzz before its release but once it was released some of the audiences were pretty much disappointed by it but certain audiences like me or in my age group(20-25) loved the movie so much. The fact that it was typically a Gautham Vasudev Menon film and so i went in to the theater not expecting a big "Mass" opening song and lengthy dialogues to boast the hero's image but a decent reality film with excellent cinematography(Hats off Manoj Paramahamsa) and beautiful songs("Oscar Winner" A.R.Rahman Rocks!). I wasn't disappointed at all and i had a pretty good time observing the chemistry between Karthik(A Good-Looking Smart Silambarasan worth his title of "Young Superstar")and Jesse(A Ravishing Trisha)and what are all the phases they go through throughout the entire movie till the climax.

I was deeply moved by the situations that the lead are put to that tests their strength of love rather vaguely. Songs are the biggest plus for the movie and with A.R.R at the helm you can't expect anything less than a riveting music and an excellent BGM. A.R.R. shines in both these with his usual trademark. Whoever says whatever about the movie nobody can take back that VTV is indeed a different attempt in modern day Love stories. Want to know why? Just go for it! You'll enjoy the most if you see this with your lover by your side!

Vinnaithandi Varuvaya, the much expected and much-hyped movie of Gautam Vasudev Menon with Simbhu & Trisha in the lead is a timeless classic in all aspects.The songs already hit the chart busters with A.R.Rahman's Magical Music which helped create anticipation for the movie.i had seen the movie 8 times and i am still counting. Even in action films like Kaakka Kaakka and Vettayadu Vilaiyadu and family drama like Vaaranam Aayiram, the romantic scenes are refreshing with cute & chirpy dialogs. Since it's a full-fledged romantic movie I never wanna miss this.i am an Oriya but i like to watch south movies with English subs.i am a great fan of Mani Ratnam and Gotham Menon and i just love to watch their movies.

The movie is all about Karthik, an aspiring film maker and Jessi, a program Analyst working in Polaris. It starts in Jessi's wedding at a Church where Karthik narrates his flashback. We simply forget Simbhu and Tisha and can see only Karthik and Jessi romancing. He falls in Love with the ravishing Jessi at the first sight . She goes to Alleppy to spend a week vacation with her grandma. Soon Karthik follows her to Alleppy to say sorry to her. This time the director himself has added a dialog referring to VA. Seems Gautham is still in VA hangover. Meanwhile he befriends Ganesh, a cinematographer and tries to join as an assistant to director K.S.Ravikumar with his reference. Ganesh supports his love and accompanies him to Kerala. Karthik asks Jassi to forgive for his behavior and wants to be a friend with her. Jassi likes the way he proposed and also the way he said sorry. She likes his courage and befriends him like Meghna of VA. She starts loving him but denies to accept it since his parents are staunch Christians and will never allow to marry a Hindu guy. But she wants to be with him just as a friend. Their parents come to know about their affair and Jassi's parents arrange for her marriage while Karthik's parents shift their house to another area. Jassi leave for Kerala for her marriage. Karthik goes to Kerala with Ganesh and narrates the story to us till this part.

The story has the twist in its 2nd half which is the highlight of the movie. Unlike other Gautam movies, the 2nd half is pretty interesting despite its slow pace. I don't want to disclose the twist. It has a very good feel of romance. I bet that it would rekindle your Love in the present and in the past and it would take a long time to come out of the impact.

Both Simbu and Trisha have given their best performances till date. Both of them share a good chemistry. Trisha sheds her Glam doll role and steals our heart as Jassi. Simbhu sans his finger mannerisms, punch dialogs, double triple meaning sleazy dialogs makes a strong impression as Karthik. . He's simply mind blowing when he describes the girl in his heart. Apart from the lead couple it's Ganesh who comes throughout the movie without breaking the flow of the movie. Thanks to Mr.Menon for not casting a popular comedian for that role which would be a compromise for C Center audience. K.S.Ravikumar comes now and then as director and makes us laugh st times. Bob Anthony, the yesteryear villain does a neat job as Trisha's stubborn father. His brother looks like a puck rowdy with Gautham's rugged voice. We can't believe it's Trisha's brother. Very bad choice. Her mother- Ayyo Paavam!!! Kitty and Uma Padmanabhan are just okay as Simbhu's parents. Why they were not shown in the 2nd half? His sister doesn't make any mark. Simbhu's voice modulation could have been better.

Music- The greatest asset of the movie right from the beginning till the end with excellent background score. I don't like all the songs since they are lyrically-challenged. I thought Thamarai had less job to do with 6-7 lines per song with repetitive verses. But it's so much related to the movie. Esp Kannukkul Kannai & Mannippaya. The bitter truth is the lyrics are dominated by Rahman's Music unlike Harris' who gives importance to lyrics in some songs. The Picturisation of Hosannah, Omana Penne and Kannukkul Kannai are visual delight but I didn't like my favorite Mannippaya on screen. It lacks the feel that Shreya Ghoshal has in her voice. It was pictured as a happy duet instead of the melancholic lyrics. It should have come after their separation. Similarly the Picturization of Aaromale is also not so apt as far as the lyrics are concerned.

Manoj Paramahamsa is the eye of the director. The locales of Alappuzha, Malta Island, and Sinbhu-Trisha's house are treat to watch. We can feel the story is happening in our next home. He's done a fabulous job post Eeram.

A special mention to singer Chinmayi who has done a wonderful job by lending her voice to Trisha with exact Tamil and Malayalam accents. The way she says Karthik is so lovely and romantic. Does she have a BF named Karthik? Great job Chins! Also to Nalini Sriram for giving decent and elegant costumes to Trisha and making her looking gorgeous. (Esp the first blue Saree till the red Saree in the climax). Simbhu too looks so smart with his casual shirts.

On a whole, the movie is a must-watch. If you watch movies for time-pass and expect action, mas ala, item numbers, it's not your cup pa. It's not for those who see movies, it for those who feel movies. After Alaipayuthe, I loved this as a full and full romantic movie without any action, comedy sequences (almost after a decade). Don't miss it if u love LOVE! My Rating : 5/5