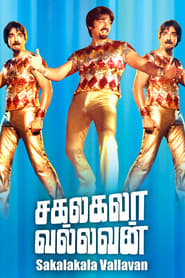 Hero is happy guy until he meets a beautiful girl and falls for he.He disguises himself as unattractive guy to her and she too falls for him, film takes a twist when his ex returns and follows revenge and drama.

Hero is happy guy until he meets a beautiful girl and falls for he.He disguises himself as unattractive guy to her and she too falls for him, film takes a twist when his ex returns and follows revenge and drama.

What more can I say?

I was expecting a sequel to Manmadhan(2004) and instead I feel like I'm watching the same film over and over again.

This is because Vallavan had a similar storyline to that of the recently released films Kedi, Thimiru, Nee Venunda Chellam. In the past we have seen Padayappa and the Hindi films Tumse Accha Kaun Hai & Uff...Yeh Mohabbat. All these films have something in common with Vallavan: the presence of a screen villi( Tamil slang for a female villain).

Female villains are more impressive as they use their brains and emotions rather than brawn to bring about the negatives in the screenplay. It takes more acting skills for female villains than the male ones. Hence, I seriously applaud ladies who have played vamp roles when they have done a good job.

After a swashbuckling screenplay in Manmadhan, Vallavan's script severely pales in comparison. But the film does have its plus points: cinematography, presence of a villi and best of all, Yuvan's wonderful tracks. 'Vallava' & 'Loosu Penne' are sweet romantic tracks. Reema Sen has done a great job as a villi.

First of all I went for this film with no expectation. Until half of the film I don't know what this whole movie is about. Then Reema Sen's role introduced. Simbhu failed to convince us Reema as school student and she has an awful screen presence. The things Reema doing to check whether Simbhu is in love with her or not is too ridiculous and some time disgusting too. And Climax.... Just for sake of finishing the film and nothing much to say about it.

The only thing which makes us relief is the music. Even the background score makes us think that something is going to happen next even though nothing interesting after that.

Towards my point of view this film sure gonna loose some money because Simbhu spent more that he should. I read an interview of him that he will become the next "SHANKAR" and what I am saying is being "SHANKAR" means not dancing with more than thousand people around you. It is more than that.

Simbhu should sit down and think more on developing the story than his screen presence as a director. I think even SUPER STAR RAJINI did not had such "Build Up"s than Simbhu in his films...

Simbhu still have a long way to go and as a result he should TALK LESS.

oh god..please save the people who has seen this "comical acting, fatuous direction, futile story, insane dialogues,etc" which gave a non-stop unbelievable maligning experience till the end..people watching this will go into an irrecoverable coma..it was an harrowing experience..

the director-what is he trying to make, it looks as though he was completely out of his mind..the viewers will not condone this piece of work..unfortunately this movie has the same director, story-writer, and also the leading actor..at least this time the blame goes to single person..simbhu takes the sole responsibility for making life difficult for viewers..he has given importance in exposing extreme vulgarity..

music-this is the only good thing about this movie..it has some good numbers and good background score..but it doesn't make this rubbish watchable..

nayanthara and reemasen - i pity them both..i feel that they would have done much better for any other movie..they were doing skin show in this entire movie..reemasen's acting was terrible..nayanthara has and always done glamorous roles..she does it so as to hide her acting inabilities..

bottom line-what more to say..if you want to be peaceful please avoid this like dog sh**..if you want to terrorize yourself you are most welcome to watch this A-hole at the highest level..

actually i would like to give it zero on 10..

Vallavan - Forbidden love Hats off to Silambarasan for continuing the good run of his Manmadhan in Vallavan. A triangular love-story with twists and turns has been brought out well by the actor-director. Vallavan has excellent cinematography combined with racy background score making it for engrossing viewing.

Silambarasan occupies the screen all through, while Reema Sen has impresses all eve with her limited screen space. Nayantra and Sandhya do their best.

However, the real hero of the movie has been Yuvan Shankar Raja. His peppy numbers and brisk musical score help sustain the momentum in the movie.

Amidst campus candy floss movie, Simbhu has dished out a forbidden kind of love story that happens among school students.

The movie begins with a college student Vallavan (Silambarasan) falling in love with a professor Sandhya (Nayantra). Desperate attempts to impress her succeed. But Vallavan hides the truth that he is a student and three-years younger to Sandhya. Later, Sandhya, coming to know the truth, decides not to go ahead with her plans to marry a youth, who is younger to her.

Meanwhile a flash back reveals Vallavan's romance with a classmate Geetha (Reema Sen). A hysteric Geetha ensures that Vallavan runs crazy behind her. Coming to know of her true nature, Vallavan resolves to teach her a lesson.

Geetha returns one fine day only to inform Vallavan that she was the one who played spoilsport in the affair between him and Sandhya to teach him a lesson. The remaining story is about attempts of Vallavan to marry Sandhya but with Geetha going hammer and tongs to prevent it.

Silambarasan has utilized the opportunity well to glorify himself. He boasts himself uttering lengthy dialogues. But the man sure has oodles of energy and is a livewire all through.

Nayantra plays his lady love. Sandhya as Silambarasan's friend has played her part well. Reema Sen, whose character resembles Neelambari of Padayappa, does what is expected of her. She even takes to arms to take revenge Silambarasan. She is, overall, very convincing.

The rest of the cast including Santhanam, S Ve Shekher fits well.

Priyan's cinematography deserves a mention. His lens has captured the song sequences well. As we said, Yuvan is the backbone of the movie.

All told, Silambarasan has brought out the director well in him.

For more details on the movie u can check it in his official fan club www.simbu.cjb.net or www.groups.yahoo.com/group/silambarasan-simbu