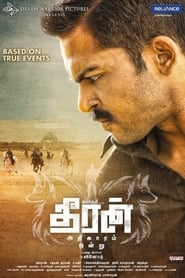 Theeran, a police officer, tries to decode a series of cold blood events based on same pattern. Who's behind those ruthless events? How Theeran and team traces them? Did they succeed? forms the story of this crime action thriller. The story is based on true incidents handled by Police department in 2000s.

Theeran, a police officer, tries to decode a series of cold blood events based on same pattern. Who's behind those ruthless events? How Theeran and team traces them? Did they succeed? forms the story of this crime action thriller. The story is based on true incidents handled by Police department in 2000s.

A movie with a exceptionally good story and super involving screenplay.

Theeran Adhigaram ondru is destined to become one of the best cop movies ever to be made in Tamil film industry. A lot of effort has been put into writing the script and the screenplay that one can clearly see it's effect on the screen. All through the movie there was no plot holes or logical blunders which bothered me as there was nothing big enough to notice. For example, the mobile phones used by the characters were representative of the time period the movie is in. From the Nokia 1100 and Motorola Flip phones to Touch Screen smart phones, the mobile phones gradually changed in the hands of the characters.

One of the main success of this movie as I see is the way in which they have established every character in the movie. Almost all the prominent characters have a back story and the director has done a great deal of research about the dacoits and criminal investigation techniques used by the crime solvers. The first part of the movie features some cold blooded murder cum robbery sequence, which are shot very realistically and the screenplay so involving that I felt like I witnessed everything first hand and they have not over done or exaggerated any action sequence in the movie, they all look very realistic.

Unlike other cop stories where the protagonist will be able to miraculously able to solve crime almost like Sherlock Holmes with out explaining us how it is done, in this movie though there is a reference to Sherlock Holmes the whole investigation process is bound by the realism of this material world. The director did a great job in explaining the actions of the characters without boring us with lengthy voice overs.

The Back ground score is very engaging and really sets the tone for every scene. It was instrumental in carrying the emotions depicted on the screen to the audience. The placement of the songs too were reasonable. They came like a much needed breather in between the cold blooded action in the first half.

Overall, Theeran Adhigaram Ondru is going to be a career best movie for Karthi as this has indeed over shone his performance in Paruthiveeran. This is a must watch movie if only you could stomach a little bit of gore and spine chilling violence (They did not over do it). Hats off to the team...

I don't remember when I last saw a fast paced action thriller like this in Tamil. We are thoroughly absorbed in this movie that interval alone indicates that we are at the halfway mark. The only minus point in this movie is the romantic segment, which I personally feel as unnecessary for an action movie like this. So I reduce one star for that. The theme of this movie so unique and original. It's a ghost haunting from the past. The director had cleverly linked the past history to the present fiction. Even though Karthi is a super actor, super heroism, like flying in the air, hitting ten persons in one hit, etc. are minimal in this movie. This is an important plus point in this movie, because it makes you believe that you are actually watching a true story rather than a fiction. Acting by Karthi is excellent, doing his part perfectly without overdoing it. Many scenes in this movie, make you a participant in the ongoing action,than a mere spectator. A real gem among Tamil action movies.

H.Vinoth has given a cult movie !! PERIOD.

The film is a horror-thriller roller coaster. The director gradually holds your hand and takes you to the ride and pushes from a dizzying height of horror and thriller to narrate his true story on notorious Bawaria robbery gang.

As a person who have watched few of the top horror thriller genre movies , but this movie will send chills down your spine , mainly because it has the element of locality, something close happening in India.

Director has taken lots of pain in detailing the movie and as far as i remember, there aren't much holes left , eve in the scene were the gang will stop the train , if you listen closely , the passengers will say " this is the usual mischief done by the train traveler" , so there the director has given us a reason that this thing is common , so the train after a short while starts to move. Or else we know it will take much longer time for the train to start after emergency stop is activated.

Small things like these and also not deviating from the core and giving us the whole anatomy of this notorious gang right from their root has only strengthened the story and it makes the whole narration and the gang stick close to our heart.

In most movie the enemy will be hyped till a certain point and after that his fate nose dives from there. But here the director has kept the hype - and it sticks too till almost three quarter of the movie , there my making us tremble each time we learn about the gang.

Karti has done EXCELLENT EXCELLENT acting. He has played it aptly. I don't think anyone would have fit the role , may be Kamal ?

Love sequence are the only downers in this movie.

Movies like these elate the Tamil industry to new heights.

Not for the faint hearted though..

In a seminal scene in Theeran-Adhikaram Ondru, DSP Theeran (Actor Karthi plays an upright police officer endowed equally with brains and rippling muscles) storms into a den of outlaws in the badlands of Rajasthan. He advises his team to stay inside the car as he walks on purposefully, the dusty hamlet is all eyes; it's the territory of Omah Singh, a much-feared highway dacoit responsible for a breakout of murders in rural Tamil Nadu. As the dust motes ripple upward in the desert air, Theeran slams one after the other until Singh sits up and takes notice, his hookah forgotten

The face-off defines the movie. Can a district police chief trace murders all the way to the North-West, surmount the crippling bureaucracy of multiple governments and bring to book a dacoit gang wreaking havoc on the crime numbers in TN? An emphatic Yes!

H Vinoth, who deftly portrayed the lives and tricks of a gifted conman in Sathuranga Vettai is telling us a cop story this time. The usual clichés are in order: Theeran is transfer magnet, courtesy his sky- high morals and commitment to policing. His stay-at-home wife (Rakul Preet) is content with chiding him now and then about not being home most days. He chooses to go after the criminals when a dilemma presents itself after he gets to know his wife is dying. Even during training days, Theeran shows signs of precocity – he knows how to handle a crime-scene weapon (We are informed the usual handkerchief method of securing it will not protect the prints! Theeran holds it between two fingers at points where the criminal might not have touched the weapon).

Neatly parted hair and a razor-sharp mush and almost-always wearing a dark shirt straining against his chest, Karthi looks every inch the ideal police officer. Assisted by a team of devoted cops, Theeran leads a national hunt for fingerprints that lead them into the history of Indian outlaws with origins in the British era. These huntsmen have no targets but gold, unless you leave out savagery. How Theeran bumps off each one of them form the crux of the story.

Negatives include a bit of drag in the scenes describing the Rajasthani outlaws, or when the action sequences gets a little too long – Theeran beats the villain to pulp in searing Rajasthani heat before dragging him through the desert sands on a horse! Classic. A few songs are plugged here and there in the movie and they pass without causing inconvenience. The background scores for the Dakotas are particularly effective in accentuating their bestiality. Overall, music director Gibran is very good in many parts.

The story itself rests on actual history. Dacoity at homes along the highways was a menace in Tamil Nadu during the late 90s. Apparently, Tamil Nadu had ranked high in taking it seriously and wiping such crimes off its map, although the policemen behind the job had gotten little credit.

True to that, Theeran spends the twilight of his career behind a desk, complaining about a rickety chair not replaced for months. A young officer having known his deeds drops by just to salute him, and Theeran betrays that old glint of uprightness still bright in his eyes.

After all these years? If you are Theeran, You would say "Always."