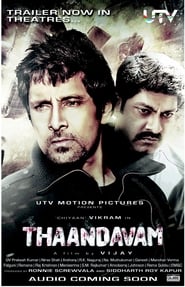 The film opens with Kenny (Vikram), a Pianist in a church and a blind man who is on a vendetta mission in London, which has been ravaged by a series of bomb blasts. During the night, Kenny becomes an obsessed killing machine and goes on a killing spree murdering mostly white men. In a flashback mode it is revealed that Kenny is actually a top RAW officer Sivakumar whose buddy was Sarath (Jagapathy Babu), his colleague in the intelligence department. Siva marries Meenakshi (Anushka) an eye surgeon and was leading a peaceful life till fate intervened cruelly and turned his life upside down. Written by Ajith

The film opens with Kenny (Vikram), a Pianist in a church and a blind man who is on a vendetta mission in London, which has been ravaged by a series of bomb blasts. During the night, Kenny becomes an obsessed killing machine and goes on a killing spree murdering mostly white men. In a flashback mode it is revealed that Kenny is actually a top RAW officer Sivakumar whose buddy was Sarath (Jagapathy Babu), his colleague in the intelligence department. Siva marries Meenakshi (Anushka) an eye surgeon and was leading a peaceful life till fate intervened cruelly and turned his life upside down. Written by Ajith

Vikram is back with a bang! Returning as a silent but deadly blind revenge seeking hero, he takes center screen to kick butt. Infusing a credible premise with honesty, and peppering the film with tender moments, director Vijay creates an engaging drama that you're happy to emotionally invest in. Technically, Thaandavam is one of the best films to have emerged out of Kollywood in a long time. Add to that some peppy melodies from GV Prakash and comedy that goes with the narration makes it entertaining.It is Vikram and him alone who diverts your attention from the film's little logical script flaws and spellbinds you with an endearing act that is Thaandavam's biggest strength. Exuding menace with his expressive eyes and body language and the tiniest of tics to make flesh- and-blood characters out of Sivakumar IPS and Kenny the blind man seeking revenge, Vikram is simply terrific. Vijay with the help of Daniel Kish, an echolocation expert has made Vikram's blind assassin role credible and awesome.Technically it is Vijay's best film with superior eye-catching camera by Nirav Shah and peppy melodies by GV Prakash with 'Oru Paadhi Kadhavu' being the pick of the lot. The action choreography by Manohar Verma is awesome especially the fast paced fight scene when a blind Vikram is attacked by six foreigners in a London park.Please note inspite of some gruesome killings in the plot line there is no blood or gore, hardly any smoking scenes, no drinking scenes or even an item number. For an audience numbed by predictable Kollywood potboilers week after week, Thaandavam might take some time to settle into; go in with an open mind and enjoy the ride.

Well done Vijay and UTV for making a film that can be viewed by family audiences.very gud movie must watch!!!

* Cast , vikram has proved himself greatly after the defeat of "Rajapattai",fantastic performance as a blind man and he comes with a six pack before interval,Anushka was romantic in her first scene and follows, Amy jackson is waste...... * Nirav shah cinematography was superb and feels very pleasant to watch the entire movie with a pleasant feel.... * Story was fantastic and very perfectible....... * Music , G.v.prakash songs were not good except the second half songs are watchable than in first half, in the beginning of the movie BGM started well but he fails in the remaining plot....

Finally ... It is a clean package entertainer with romantic scenes and thrilling chases..overall it is a perfect one time watch.......

The film is an action entertainer about a blind man with 'echolocation' power, who takes on a revenge mission. — at Sathyam Cinemas.
Read More

This is my first review. And i couldn't resist writing one after watching thaandavam. Its wholesome family entertainer. Vikram Carries the whole movie on his shoulders, Be it the suave cop or the blind assassin. Movie carries an air of suspense throughout the movie. Apart from vikram the other notable performances are from Anushka and Santhanam. To note down few highlights The sequences in the village are a scream!! Romance between Vikram and Anushka is very well done. You don't get to see the typical flying kollywood action scenes. Stunts are done in a very realistic manner. The whole team has given there heart out. Its not always you will get to watch such a clean entertainer. This movie is not without its flaws. Screenplay drags a bit here and there. But if you be patient you will realize that the movie was worth everything. This once again proves how sincere and honest an actor Vikram is!! Verdict : Don't Miss It and watch it with your family!!

A slow yet powerful revenge mission

A good film needs acclaim for every element in it. So let us have a break up review of each and every good element of the movie that has added success to it, Direction: Madarasapattinam and Deivathirumagal fame director Vijay has added yet another new genre this time in his menu. With no influence of style from his movies he gives us a good, moving thriller that picks up speed as the story goes. Simply superb direction by Vijay. Yet another movie joins his victory wagon. Casting:

Coming to the lead role Vikram has done a fabulous job, lifting steeply in his career graph after his recent flop flick 'Rajapattai'. He takes up roles in two shades and justifies both. Coming to the lead heroine the beautiful Anushka has utilized her screen space effectively and proves through her matured acting. Amy Jackson does a Barbie doll role; she has got everything to take up as a routine commercial Tamil cinema heroine. Lakshmi Roy to say has done an extended cameo role yet a powerful one. Santhanam comes now and then in the movie and lights his comedy crackers. Nasser and the Telugu actor as the investigation officers have lived up to their roles; of course Nasser's acting skills are legendary. The villain from Telugu has given a power packed performance Kollywood Welcomes you villain sir! This movie has got huge list of supporting cast starting from Sharanya, Balaji,Thambi Ramaiyah, Sujitha, Delhi Ganesh, Shayaji Shinde and the list goes on every one comes for a micro role but has done justice to those roles. Technical Crew: Excellent cinematography by Nirav sha and Music by GV, entire album was good particularly Uyirin Uyirae song was a good melody and Yaradi mohini song reminds us of Nangai song from Engeyum Kadhal. Worth the mention would be the art work in Uyirin Uyirae song on the beach shores was visually sumptuous and the credits to the art director. Story line:

Since this is an action thriller I don't want dig the suspense in the movie. In one line it is a revenge movie with a powerful flashback and a cute romance story in it. The new flavour of romance between Anushka and Vikram was so fresh and has come out very well. Final link with the five elements of the nature was brilliant. The echo location was a new concept to kollywood movies. Verdict: New action thriller flick with a romance and revenge flavour with all necessary elements make this movie a worth watch. -Reviewed by Sivakumar Balachandran