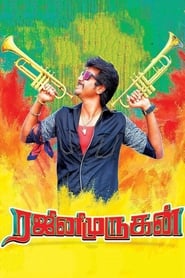 The team of Varutha Padatha Valibar Sangam returns with a brand new comedy - Rajini Murugan. The film centers around Rajinimurugan, a jobless youth whose main pass time is to spend time with his friends. After a family dispute that causes rifts between his brother and the rest of his family, Rajinimurgan decides to give his brother a lesson.

The team of Varutha Padatha Valibar Sangam returns with a brand new comedy - Rajini Murugan. The film centers around Rajinimurugan, a jobless youth whose main pass time is to spend time with his friends. After a family dispute that causes rifts between his brother and the rest of his family, Rajinimurgan decides to give his brother a lesson.

Just watch it for Fun. Other wise, DON'T!

After VVS, I expected something different from this combo. Guess what?! I got the same food cooked up on a different plate.

Apart from few comedy bombs, there aren't any relief in this plot. There isn't even a plot to discuss. You can't even guess a single line to portray the movie as a whole. I think it was just meant to be like that.

If you wan't to watch a movie without considering logics, plots, story, screenplay, and just want to enjoy at some jokes, get in rage with a villain with some fiery dialogs and then get emotional with family sentiments, this movie is for you.

Movie lovers - You will regret if you go for this one! Best of luck!

Without considering any logics - 7/10.

Tiring Comedy in the Plate

Siva Karthikeyan does again. Coming with a script-less movie and took the whole movie in his shoulders with his act..

Rajini Murugan revolves around an as usual carefree youth, who doesn't want to work nor to earn money falls for a girl in his neighbourhood. Rajini Murugan encounters a local goon during a business sale. How he overpowers the goon forms the story.

A complete senseless movie and some good comic moments here and there with D. Imman's same old background scores and songs (i think he is out of his tunes). Keerthi Suresh did good job in her role (better than any previous movies). she looked ravishing in rajini murugan. Samuthirakani is wasting his career by acting in single oriented movies (thats all i need to say after this movie).

All in whole a mediocre movie lifted to average by Sivakarthikeyan My rating 5.1 on 10

Sivakarthikeyan,manages to give a hit in a movie which has a weak story.A free-to-go youth falls for a girl at the same time has to protect his ancestral property .Soori does his role perfect as hero's friend and Keerthi Suresh is more homely and seems to fit in her role.Rajkiran,Samuthirakani do their part .Director Ponram couldn't give the same sparkle of Varuthapadaatha Valibar Sangam,but manages to scrape through.Immans music seems repetitive and the screenplay in the second half seems to drag a bit with songs which are unwanted.A good entertainer with some potholes would be my review. I hope Sivakarthikeyan takes effort to select good scripts.

FINAL VERDICT:- * Overall... it is a clean family entertainer, Soori and Siva equally delivers a wholesome comedy elements. Movie is same like VPVS but different starcast. You will enjoy from start till end.... This is a sure shot winner for this season. Don't expect any story, just enjoy with family or friends....

A couple of friends try to make something of their lives in Madurai.