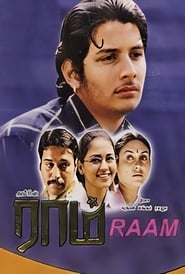 Ramakrishnan is mentally affected by autism spectrum disorder "ASD" in his small age and Saradha is a school teacher "Ram's mother". The movie begins with Saradha murder. The police investigating the ram and his neighbors. Finally, the killer identified and how the police and Ram treated the killer is the story.

Ramakrishnan is mentally affected by autism spectrum disorder "ASD" in his small age and Saradha is a school teacher "Ram's mother". The movie begins with Saradha murder. The police investigating the ram and his neighbors. Finally, the killer identified and how the police and Ram treated the killer is the story.

Good mystery thriller, with an excellent performance from Jiiva

I always thought of Ameer Sultan as one of the more advanced directors in Tamil cinema, who often came up with different kinds of films, often with some sensible, emotional weight. 'Raam' fit perfectly into this category.

With a good, strong story, 'Raam' revolves around a small set of characters. It was a good mystery, employing my favorite methods of telling a mystery story; by swapping from the past to the present, to and fourth, each time getting closer to the big climax. If I had to credit the films success to anyone, I would have to give it to Jiiva. Despite being a relatively new-comer, he performed astoundingly well. He completely justified being the title character and made the film happen.

Sultan did a good job of quickly establishing the characters, without dragging the film at any point. The mystery was successfully maintained throughout, and the music score was good. The mother and son relationship portrayed here was touching, and the emotion was truly created because the characters were so well written, with Saranya and Jiiva playing them just right.

Overall, 'Raam' was a good watch, particularly meant for those few that like a good story oriented mystery thriller.

Right from the opening scene, Ameer, the director of the film hints us that it's not yet another 'run of the mill kind' of thriller. Though we can sense Bala's influence over him in many scenes, he has mixed commercial attractions in the film in right proportions. Though Ameer's earlier film Mounam Pesiyadhe is primarily a romance, Ameer proves that he is no slouch when it comes to mystery thriller either. A simple story of mother-son bondage forms the crux of the film. The entire story occurs in Kodaikanal. The movie commences with Rama Krishna (Jeeva) and his mother Saradha (Saranya), a school teacher, lying in a pool of blood; later police finds Raam is still alive and arrests him on charges of murdering his mother. A straight-forward Police inspector Umar (Rehman) interrogates the case. The story is narrated in flashback. Rama Krishna is a mentally affected child who lacks maturity for his age, and lives with his mother Saradha. His mother is everything to Raam. Raam also gets provoked easily and cannot tolerate anything wrong happening in front of his eyes. Sub-inspector Malaichamy's (Murali) family lives next door. Malaichamy's daughter is Karthika who falls for Raam. Umar grills each and every soul connected with Raam and the teacher. He also tries to find out from Raam in all possible 'ways' the reason behind murdering his mother. In the meantime, sub-inspector Malaichamy gets irritated when his son and Karthika are summoned by Umar for interrogation. Finally the police track down the actual killer. The rest is all about how Raam takes revenge on the killer. The film has surprising twists and keeps us hooked by being fast-paced and never predictable. Ameer has drifted from the usual format of film-making. For instance, there is no separate comedy track. But still comedy is interwoven into the film very well, and at the right places. The end of the movie is also very different, for which Ameer deserves special mention. He deserves to be congratulated again for not letting vulgarity creep into his story and for creating comedy without using any of the usual comedy stars. Jeeva, once the "lover boy" has been transformed into an arrogant guy with staring looks suiting the role like a glove. He plays the role of the angry young school boy who is passionate with his mother and brings out the changes nicely through his expressions and body language. He is maturing into a realistic actor. If Jeeva chooses his future movies carefully, he could easily overtake his counterparts in no time. Saranya has given a striking performance. Ghazala, with the "girl next door" look, has done a decent job, neither overdoing nor underplaying the role. Murali as the father of Ghazala has done a fair job. Rahman has made an impressive comeback. Kanja Karuppu as Vazhavandhan, who has made a debut in this movie as a jockey and friend of Raam has done a commendable job. His comedy is so natural that it's difficult to believe that it is his first movie. Yuvan's music and Ramji's camera are the major assets for the film. The winning combo of Mounam Pesiyadhe has once again come out with a stunning film. The film has a typical 'Yuvan kind' of music. He is emerging with a style of his own in each and every film. Yuvan has something different for us this time. The songs which are situational add strength to the screenplay. The song sequences are unique, filled with ideas; the music and photography make sure we don't walk out of the theater during the songs. Ramji has tried innovative shots. His camera has captured the picturesque locales of Kodai. A solid performance from Jeeva combined with amazing cinematography by Ramji, unusual music by Yuvan Shankar Raja and a gripping screenplay by Ameer makes the film a treat to watch.

I caught this film when it won an award on Indian Panorama. Raam was the only Tamil entry among the plethora of Malayalam movies screened at Indian Panorama(as usual, in the previous years). Raam is 1 of the latest in the follow-up the range of movies starring newly emerging young heroes in psychotic roles. Following Dhanush in "Kadhal Konden", Bharath in "Chellame", Simbhu in "Manmadhan", slightly older actors like Surya in "Ghajini" & Vikram in "Anniyan" & even Jeeva's older bro Ramesh in "Githan", Jeeva plays autistic teen Ramakrishna with a close attachment to his mother & allegedly murders her.

The film has an aura of suspense right from the beginning & gives us jolts in periodic intervals. Though the film is mainly a character study, it falls in the genre of a murder mystery thriller. Hence, it is a commercial artistic film which has won many accolades for its director & hero. Worth the DVD. I do not particularly like the songs here though they have topped the album chart for God-knows-what reason. Yuvan Shanker Raja has scored the music much better in films that were less successful. Watch out for Ameer Sultan's upcoming movie, another character study called "Paruthi Veeran" with another new young hero.

raam is an excellent thriller movie. if this movie does not make your pulse fasten up, then you must check the doctor. raam is a young boy who lives with his mother. he is very affectionate to her and his mother to him was everything for him. this movie has won the best film award at the Cyprus film festival. the screenplay of the movie is awesome. the music director yuvan shankar raja is one of the backbone of this movie. he has won the original music score at the Cyprus film festival. to say shortly, this movie has added a great honour to the Tami film industry. this film has changed the actual way of filming that took place before its arrival in the tamil film industry.this was a thriller for the tamil film industry after a very long time.