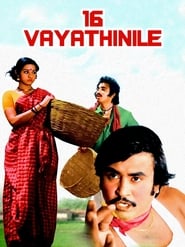 The movie revolves around the struggle and vulnerability of 16-year old Mayil (Sridevi) when in love.

The movie revolves around the struggle and vulnerability of 16-year old Mayil (Sridevi) when in love.

Kamal Haasan as Chappani
Sridevi as Mayil
Rajinikanth as Parattayan

At a time when Tamil cinema lay submerged in cliched studio dramas starring aging heroes, Bharathiraja came with a breath of fresh air with this lovely pastoral tale. Rajini, Kamal, Sridevi and a host of new faces star in this all-time classic, with Ilayaraja's mind-blowing score making it an unmissable.

16 Vayathinile came in as opportunity turn into gold for all the main cast. Rajnikanth went on to become Superstar of Tamil Stars, Kamal Hassan's career catapulted to Successful career from a stuntman/Choreographer role, This movie identified Sridevi as mainstream actress from Child artist. This movie revolves around 16 year old Mayil played by Sridevi. Owing to her 16 year old a local vet hangs out with her later to ditch her for a homely girl. After Mayil is deserted, there are only two people in her life, Parattai (played by Rajnikanth) and Chappani(Played by Kamal Hassan). When Parattai sees opportunity of attaining her Chappani acts in. Worth watching, beautiful music scored by Illayaraja.

This is an old Tamil movie of 1970s that was highly recommended by veteran directors of India as a must see movie. It is available on Google Video  so it was easy to see this masterpiece.

The story is about the dreams of 16 year old girl Mayil (Sridevi) in a remote south Indian Tamilian village of India. Mayil is secretly adored and love by her handicapped cousin Chappani (Kamal Hasan) and village rowdy Prayattayan (Rajnikant). Like all young girls Mayil aspires to be the school teacher and when she knows that a doctor from city is coming in her village, she gets attracted towards him. The doctor uses Mayil and leaves her to get married. After that slowly Mayil realizes the love of Chappani towards her. When Prayattayan tries to rape Mayil, in rage of anger Chappani kills Prayattayan and goes to jail. Mayil stands by the railway track waiting for Chappani to come back.

I do not know Tamil, but this movie brought such wonderful memories of good cinema and the nostalgia of the greats like Kamal, Sridevi and Rajnikant. This was Director Bharati Raja's first movie and I hear that a turning point of Tamil cinema where he gifted three brilliant gems to the industry. Kamal's acting is world class  and there are no words to express the respect he commands in a losing lover roles. He is the best in that character  I think he has given a totally new dimension to this one sided lover boy role. Sridevi is brilliant and looks extremely beautiful in this movie. Rajnikant is a pleasure to watch in a small but mean role of villain.

Bharati Rajas has encapsulated brilliant cinematography, locale and life style of village people - the simplicity, the aspirations, and the innocence. Ilaya Raja has given soul stirring memorable songs that you do not get tired of hearing even today.

A very good cinema to watch. The movie was re-made by Bharati Raja himself in Hindi as "Solwa Sawan" and bombed miserably at box office. Sridevi has introduced for the first time as lead lady and I think Amol Palekar played the role of Kamal. The stage of the career Sridevi, Kamal and Rajni were in Tamil cinema, that too helped the movie such a boost and become a major all time hit. History could not repeat itself in Hindi cinema. So that was the end of Bharati Raja's career in Bollywood, but not of Sridevi, Kamal and Rajnikant, who though not very successful  gave huge hits in the debut in Bollywood.