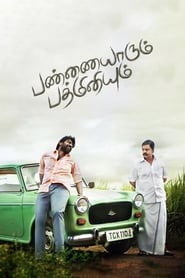 The story is single layered and revolves around a car. A village Pannaiyar or landlord (Jayaprakash) takes a liking for a Fiat Premier Padmini car that has been left in his care by a friend. Pannaiyar falls in love with the car and appoints Murugesan (Vijay Sethupathi) a tractor driver as his personal driver. Soon the car becomes an all-purpose vehicle for the villagers. But for Pannaiyar, his wife Chellamma (Thulasi) and Murugesan, the car is a like a family member. Due to unavoidable circumstances the car is taken away leaving them heartbroken. Written by Surya Kumar

The story is single layered and revolves around a car. A village Pannaiyar or landlord (Jayaprakash) takes a liking for a Fiat Premier Padmini car that has been left in his care by a friend. Pannaiyar falls in love with the car and appoints Murugesan (Vijay Sethupathi) a tractor driver as his personal driver. Soon the car becomes an all-purpose vehicle for the villagers. But for Pannaiyar, his wife Chellamma (Thulasi) and Murugesan, the car is a like a family member. Due to unavoidable circumstances the car is taken away leaving them heartbroken. Written by Surya Kumar

A simple casual beautiful story about a car and it's owner

Some movies makes you feel different in all of its aspects, PP could be easily listed in that category. A plot which entirely revolves around a car!! Really a new idea and promising that Tamil industry is progressing in a healthier way. Hats off to the debutant director and his crew for this film.

A village drama about a land lord and his pride of owning a Premier Padmini car which was considered as a prestige in the 80's. Casting: Vijay Sethupathi has lived as Murgesan the driver who is treated more like a son in that house. He is so effortless with the way he takes the character with his appearance. JayaPrakash who has always been the promising supporting in recent tamil cinemas has taken the lead role in this movie as Pannaiyar. He has delivered a very solid performance in showing romantic expressions towards his wife and car. Thulasi as Mrs. Pannaiyar is the actual heroine of the movie she is so natural and has done 100% justice to the role of Chellamal. For the first time in the tamil movies we see a natural elderly and matured love story tale and where the youngsters love line has been side tracked and over taken by these two oldies. Absolutely heart warming love between Mr. And Mrs. Pannaiyar and particularly the way they address each other was superb.

Ishwarya Rajesh as the love interest of Murugesan has a very limited scope in the movie. She looked fine in her role with her expressive eyes. It seemed like it was all Muthazhgu of paruthiveeran who started this heroine style. Bala Saravanan as the side kick of vijay fires the comedy crackers which was enjoyable throughout. Neelima as the greedy and demanding daughter of Panniyar has added the little negative shade needed for the movie about all goodness and no violence. Cameo roles by Dinesh who narrates the story to us and Sneha were no surprise element because they were included in the flow of the movie.

The movie was initially a success as a short film. Debutant director Arun Kumar has made a sincere attempt in expanding it into a refreshing feature film and has succeeded in keeping us engaged. Cinematography by Gokul Binoy was absolutely brilliant in the way he has captured the liveliness of the village and has made us believe in the car as an important character. Music by Justin converted the entire movie into a melody with his BGM.

To the negative side I have not much but length of the movie could have been reduced by 15 - 20 mins. Some scenes you feel the movie is too slow but I feel that's because it's nature of the plot

Verdict: Get inside for a soothing story of an old man and his bonding towards his car and wife. You will feel happy and satisfied in the end, if you are a lover of story and acting based movies with absolutely no violence. Watch it with your family definitely this will bring up nostalgic feelings of your own first car and village visits.

excellent movie...proud that its a Tamil movie!!! :)

This movie was something completely unexpected, these days movies are so much hyped n then turns out to be crap but this movie surprised me to the core.

It was wonderful... a must watch. Every character in this movie have acted so well that I can't point out whose better. Everyone has given their best expressions in every scene. The comedy has worked out pretty well in the movie

SNEHA was a unexpected pleasant surprise...!! Very glad that she's back into acting after marriage. I hope she continues her acting.

Too good movie...you'll have a wonderful smile throughout the movie. I can't think of 1 mistake in this movie. I loved it n I'm pretty sure you will too.

I'm really proud that this is a TAMIL movie n more proud where the Tamil movies are reaching in terms of quality scripts. Let more movies keep coming like this !!!

a simple story with extra-ordinary things

"Pannaiyarum Padminiyum" is a slow moving hilarious tale of a car and its owner..Though the story is very simple you cannot find any moment which is boring. Plot- Pannaiyar aspires to buy a car and he get one as a gift.He faces many consequences and tackles them with a skillful driver.It is a love story not between Homo Sapiens but between a man and his car.

Vijay Sethupathi has performed excellently in the comic scenes as well as sentimental scenes. Jayaprakash is the man apt for the role and has given his best.Director Arun Kumar deserves an applause for his efforts. The film also portrays a love song between a elderly married couple unlike other films. The Music Director has given what the film needs. There is no violence in the film which fascinates all kinds of people.

A man can watch this film with his whole family and the director has made it so well so that everyone likes it.This film is one of a kind and deserves a rating of 7/10. Have a comfortable journey while watching the film !

FINAL VERDICT :- * Overall.... it is a best Tamil movie till date after a long time ... If u don't watch this then u are missing something to watch in your life ....

The warm love story of a landlord and his wife (and their car).