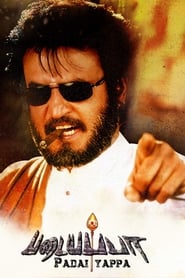 The death of Padaiyappa's father destroys his family. But his luck changes, and he is able to lead a prosperous life, until his nemesis plots to ruin his happiness once more.

The death of Padaiyappa's father destroys his family. But his luck changes, and he is able to lead a prosperous life, until his nemesis plots to ruin his happiness once more.

The best of Rajini

I was utterly disappointed after looking at the rating of the movie - 5 - who are those @#$% who rated this movie. I would give it a straight 10. This was a better movie compared to Chandramukhi (and of course BABA).

Here the director has given Rajini ample scope to perform in all three stages of the hero's life. His style, stunts and comedy in the first half. His responsible side after his dad's demise and as a father of 2 teens in the latter stages of the movie.

Initially it seemed that it was Ramya Krishnan's movie rather than Rajni's, but that was the highlight of the whole movie. You have to create something which is really bad so that our hero can destroy it with his flair.

I am still angry at the ratings for this movie. Hats off to Ravikumar(director) and Rajni and Ramya.

I'm not able to forget the moment when I saw this movie. I like the Hero of this movie very much, cuz of his style and his fast action who is the super star of TN, India named RajniKanth. The people living in this state don't want to miss his films. In every film he will deliver a message for the people living at there. Still lot of craze is on him. I saw this movie on its releasing date. On this there are 2 heroins. One is Ramya Krishnan and Sowndarya. Both are having a good role in this film. Particularly RamyaKrishnan finished a villi role in this film. She fall in love with RajniKanth. But Rajni is loving Sowndarya. Sowndarya is the house maid for RamyaKrishnan. This story moves like this. If you have a chance Don't miss. Really worth to see this film. Thanks.

rajni at his best

this is the film of my most beloved hero, my superstar 's film, every frame is thrilling and fast paced even at this age, the actor shows lot of youthfulness. that is his unique style, he has huge followin in japan too, and all over india and east asia.

Entertaining to the core, this is another in a line of commercial Rajinikanth movies. Rajini is certainly the typical hero who can do no wrong! The usual Rajini magic with his one-liner (roughly translated as: My way is unique), stunts and songs about how grateful he is to Tamil Nadu and the people who have given him his fame are all there in this movie. Soundarya is rather aptly cast as the sweet servant who captures Rajini's heart. The real highlight is Ramya Krishnan as the villain. She plays the role of an egotistical and haughty woman who falls in love with the hero and has to deal with his rejection and ultimate marriage to her servant and yet remains undefeated! All in all, typical "masala"!