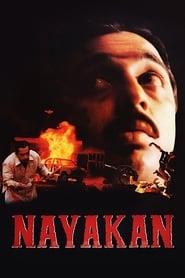 A small boy (Ratnavelu) from Tamilnadu sees his father, a labor leader, killed in cold blood by a policeman. He kills the policeman and runs away to the city of Bombay. From there, the story traces his ascent to become a mafia chief (Velu Naicker). Written by Sathyanarayanan Narayanaswamy

A small boy (Ratnavelu) from Tamilnadu sees his father, a labor leader, killed in cold blood by a policeman. He kills the policeman and runs away to the city of Bombay. From there, the story traces his ascent to become a mafia chief (Velu Naicker). Written by Sathyanarayanan Narayanaswamy

One of the best Indian movies I have ever seen.

The film draws heavily upon Mario Puzo's Godfather, however, the Indian adaptation of the well known story is simply superb. Manirathnam has done a wonderful job in re-creating the life and times of a local mafioso in the slums of Bombay. The art direction is flawless, and captures the time period perfectly. The music by Illayaraja is haunting, and reflects the nostalgic music of the early 70s. However, the high point of the movie is the excellent performance of Kamal Hassan. His potrayal of Velu-Nayakan is by far the best I have seen in Indian movies. The Hindi remake of this movie is sub-standard and poor. I highly recommend this movie to someone who has never seen it before.

Mani Ratnam rose to fame with this superb, Godfather-inspired, crime story. Kamal Hassan, in a National Award-winning role, is the highlight of this film. WAtch out for the scene where he says "Naa adichcha nee sethuruve (You will die if I hit you)" to a police officer. Based on a real-life don, Varadarajan Mudaliar, Nayagan was praised by critics and audience alike, a rarity in India. Illayaraja's music is haunting. "Tenpaandi Cheemayile", sung by Kamal Hassan, is a classic. Photography is brilliant. Mani Ratnam is top-of-the-pops. Sign of things to come? Janakaraj as the gangster's friend is an inspired selection. This is as good as it gets for bridge cinema.

Kamal Hassan's extraordinary performance is the highlight of the film. This movie is perhaps the greatest gangster movie made in India, even though it is heavily inspired by the Al Pacino-starrer The Godfather. Kamal rightfully won the National Award for his performance. Great cast, great performances, solid direction from Mani Rathnam, great screenplay = one great movie. Highly recommended. A+.

a maniratnam classic, ..brings out the tear drop in you.

It is really difficult to express the experience of watching nayakan in words, the real life story about the transformation of a boy into a rebel and then a don, brilliantly portrayed by one of the greatest actors alive today, Kamal Hassan.

While the film draws little inspiration from "The Godfather trilogy", the emotions and trauma associated with many events , along with ilayaraja's rendition of 'thenpandi seemayile' , really does make this movie very special!, nothing to beat this one, among the best movies i have ever seen. I can rate it along with American beauty, shawshank redemption or even amelie.