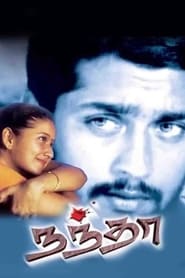 Nandha kills his father in the confusion that follows when his mother discovers her husband's philandering. Nandha is packed off to juvenile prison, leaving behind his deaf and dumb mother and baby sister. When Nandha exits prison, it is as a young man (Surya) who, first crack out of the box, discovers that his mother wants to have nothing to do with him. Written by RC

Nandha kills his father in the confusion that follows when his mother discovers her husband's philandering. Nandha is packed off to juvenile prison, leaving behind his deaf and dumb mother and baby sister. When Nandha exits prison, it is as a young man (Surya) who, first crack out of the box, discovers that his mother wants to have nothing to do with him. Written by RC

Suriya as Nandha
Laila as Kalyani
Raj Kiran as Periyavar

The film that defined the rest of the decade

After turning the Tamil cinema upside down with the ground breaking "Sethu", director Bala came up with another masterpiece which is this film Nandha. The story in one line - a tragic and dark side of a human life, in this case a ex-convict youngster Nandha who is desperately seeking affection from his mother. Indian cinema is known for its mother sentiments, but here with a whole lot of difference and with soul.

What is in this film that defined this decade

1. Director Bala - A man with unique thoughts, who is brave enough to make films without compromise and telling true feeling from the heart. Who made people notice the things that they normally ignored. A great craftsman.

2. Surya - I still remember when this film was started the popular news was Surya, who was a hansom but named as flop hero acting in this movie. But Bala helped him to prove people wrong. For me this is still his best performance. Nandha, the man with most expressive eyes. Now he is the most bankable star in South-India, perhaps soon in India by expanding all over India with Ghajini and soon Raktha charitra.

3. Yuvan Shankar Raja - After this film he has no turning back. What a composition, both songs and background score. The song "Mun Paniyaa" is ever green. Now he is the most sought after composer in south India, doing more number of film than anyone else.

4. R. Rathnavelu - Cinematographer, his success rate is 100% and most critically acclaimed in this decade. His latest Robot/Endhiran shows it all.

5. Rajkiran - His comeback film with stunning performance, now he is the most sought after character artist.

6. Laila - her best performance of her career.

A must watch film for anyone who wants to see a different film.

of all the sentiments tried and tested in Indian movies, the mother-son relationship is the most cherished and sacred...some movies have done wonders with it, some not that much and some are too cheesy and in-the- face that it disgraces one of mankind's dearest sentiments... and then there is Nandha - one that is so true and grim that you wish it never happens in real life...we dread the path the film takes and bala makes sure that our worst fears come true, and more...

Rajkiran's role in this movie is any character actor's dream - a well etched out role with wonderful camaraderie moments and neat, powerful dialog. Bala's movies have some wonderful acting pieces in it, Nandha is no exception. Its the role that made Surya what he is today, no doubt. With captivating body language and demeanor he delivers with remarkable restraint and sincerity...the only aberration is his lens. Now, why in the world did Bala use a revolting blue eye shade for Surya ? Surya's normal eyes are themselves very expressive and piercing , negative marks for the otherwise near-perfect director.

if Mani Rathnam, Balachander and others were thought of as being masters of human relationships, in walks Bala - shaking that credibility and leaving behind a mark that he can truly claim to be his own. Such easy flowing screenplay with an eclectic choice of current political subjects, this movie is a gross deviation from its contemporaries, and thankfully so.

very few, and i mean really very few films can claim to stun the audience with an intrepid, bold ending note and Nandha ends with a particularly loud bang, leaving us all spellbound causing us to contemplate our own beliefs and aspirations...hats off Bala sir !!

Have u ever felt the ache of watching a movie that hit u so hard! I felt it for sethu and then for Nandha! This movie will leave you speechless after that emotional climax!

An underrated gem from Bala!!

When this movie came out for Diwali in 2001 it was released along with biggies such as aalavandan, Shahjahan, kaasi, etc. It kind of got lost despite getting favorable reviews from critics. This one proved surya can seriously act and he was not here just because he was shivakumar's son. All the performances were riveting, right from surya, saravanan, rajikiran, karunas among others. The climax was just too hard to digest for the audiences of that time. The ending leaves your stunned and stays with you for days. I highly recommend this gem for those who like realistic, hard hitting and gritty movies, definitely not for the chicken heart-ed.