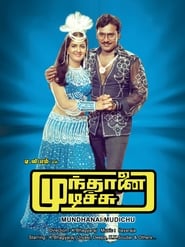 A woman finds a husband and tries to win his love through unconventional means.

A woman finds a husband and tries to win his love through unconventional means.

Thavakalai as n/A
Urvashi as Parimalam

A widower caught between the lines of seduction and celibacy

K. Bhagyaraj created a rage with this sentimental tale sprinkled with doses of humour of a widower caught in the line of seduction and celibacy. Parimalam (Urvasi) is a notorious prankster creating a variety of mischiefs along with her gang, which often end up in the village court. Bhagyaraj enters the village with his infant child to take up the vacant teacher post in the local school, but isn't spared from Parimalam's pranks upon his arrival. He takes up the job with one hand holding the book, and the other rocking the cradle in the classroom much to the amusement of local folk in the village. Parimalam's playful nature transforms into love when she learns that he's a widower. She tries many ways to win the teacher's heart, but fails every time. The teacher believes that a stepmother would not take care of his child, and thus even rejects the offer to marry his dead wife's sister. As a last hope to attain him, Parimalam blames the teacher for molesting her and even swears on it by crossing over his child in front of the village court. Petrified, and with the whole village surrounded, he's left with very little option than to marry her. But vows never to touch her and remain in celibacy. But Parimalam doesn't give. She relentlessly tries to seduce him by unconventional methods that prove to be testing times for the teacher. With the chances of winning him slowly decreasing, Parimalam comes to a conclusion once and for all Hailed as one of India's premium screenplay writers, K.Bhagyaraj narrates the story with flowing visuals. The producer A.V.M. Saravanan confessed that Bhagyaraj's 2 hour story narration to him was the best ever he heard from any director. It's hard to believe this being Urvasi's debut film. She effortlessly dons the role of a notorious girl and changes gear to a sensitive wife quite brilliantly. The film ended up with a celebrated 25-week run in theatres and turned out to be one of Bhagyaraj's biggest hits in his career. With its perfect blend of humour and melodrama, and supported by good performances this is a must see if you're in mood for a good laugh.

You have to watch this for what a genius K. Bhagyaraj was during his peak. Urvashi steals the show. The story and direction are just right. I re-watched this movie 35yrs after it was released and thoroughly enjoyed..

Very well made movie. I watched the hindi version as well, but couldn't sit through it. The acting in Tamil and Urvashi's timings cannot be matched. Watch it.