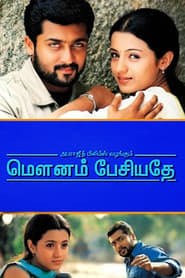 A short-tempered restaurant owner falls in love with the woman chosen to be his best friend's bride, or so he believes. How will the friends react when they realise that she is already in love with another man? Will the childhood friends succeed in finding their respective soulmates? Written by Santhosh

A short-tempered restaurant owner falls in love with the woman chosen to be his best friend's bride, or so he believes. How will the friends react when they realise that she is already in love with another man? Will the childhood friends succeed in finding their respective soulmates? Written by Santhosh

Suriya as Gautham
Trisha Krishnan as Sandhya
Nandha as Kannan

Mounam pesiyadhe is about a guy who hates the so-called modern day fast-food love. Surya is the lead actor. He got a friend (played realistically by Nanda) who falls in love , and ends up in trouble more often than not because of that. Surya saves him every time he gets into trouble.

Surya gets introduced to Trisha, a relative of Nanda. And feels he had finally met his lady love of his life. Does Trisha reciprocate his love ? See the movie to know it yourself.

The movie has got a brilliant screenplay by Ameer. Outstanding music and background score by Yuvan Shankar Raja, make it a treat to watch . A must-see movie for the youth.

Ameer is one outstanding director who has achieved the near-impossible. He has scored a hat-trick for off-beat films(films that don't have commercial aims), which is rare in Tamil cinema. After these 3 of his films that did well at the BO, I have great respect for the Tamil audience as they know what good cinema is all about. Now, Paruthi Veeran is running successfully all over.

Let's look at his first film, Mounam Pesiyadhe. Surya is the protagonist in a character role. Trisha's character is the only character that Ameer has not sketched well in all his films but she has done justice to the role. Like his Paruthi Veeran, this film is slow at some points and the screenplay drags but the end-product is as sawdusting as Paruthi Veeran. How Surya changes his mind with his secret admirer on one side and Trisha on the other(and he assumes both are one!) is brought out well. But Trisha's twist is well drawn out. Watch out for Laila's special appearance at the end!

Of all 3 of his films, Raam was the only fast-paced thriller and starred Jeeva who isn't from the Shivakumar family like the protagonists of his other 2 films. Raam won best actor and best composer at Cyprus film festival.

Let's brace ourselves to see how many awards Paruthi Veeran garners!

Watch this movie to know what real love is all about....its not bout loving someone,its about being loved by somebody(as we eventually find out)!!!! Excellent musical score by yuvan shankar raja(early days for him compared to his now famous persona)...ENN ANBE song brings out the happy feelings of love and the KADHAL SEIDHAL song conversely brings out the feelings of hatred for and because of love.

The movie has the plus points of good acting by all the characters(realistic) & excellent musical score (mix of commercial and film-relevant) and finally a good screenplay.You will never ever get tired of watching this movie because it has a definite charm of its own which will take you in,at least for the first viewing.

"THREE" thumbs to director ameer,for,this movie has made a big fan of trisha(looks charmingly simple) and surya(he is what acting is all about) and yuvan of course,for his good music.

Since the release of this movie I've never ever waited for the reviews to come before i check out director ameer's movies.

Ameer first film was one of the best film in his career. Performance of Surya was very good when compared with his performance on his other love and romantic movies even though he was pictured as he hates love. The songs was perfect and matched with the situations every song is different in the category and symbolizes very good match between director and the music composer which continues till "Paruthiveeran". Director's other film like Raam, and Paruthiveeran was also a very great movies but in all those movies the male actor is pictured as a arrogant and stubborn character. "En Anbe" and "Kadhal Seithal Paavam" songs will last for many years