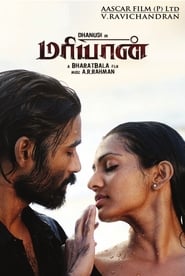 Maryan (Dhanush) is an aggressive fisherman who is slowly attracted to the feisty Panimalar (Parvathy) who is crazy about him. But Theekkurissi (Vinayakan) a local moneylender sets his eye on the beautiful Pani and wants to marry her in return to the huge loan that her father (Salimkumar) had taken. To get Pani, Maryan decides to go and work in Sudan, Africa as a construction worker under a contract of two years. But on the day of his return, he along with co-workers is abducted and held ransom by Africans to get money from the company they work for. 'Does Maryan escape from the hot deserts where he is tortured?' forms the rest of the story. Written by Surya Kumar

Maryan (Dhanush) is an aggressive fisherman who is slowly attracted to the feisty Panimalar (Parvathy) who is crazy about him. But Theekkurissi (Vinayakan) a local moneylender sets his eye on the beautiful Pani and wants to marry her in return to the huge loan that her father (Salimkumar) had taken. To get Pani, Maryan decides to go and work in Sudan, Africa as a construction worker under a contract of two years. But on the day of his return, he along with co-workers is abducted and held ransom by Africans to get money from the company they work for. 'Does Maryan escape from the hot deserts where he is tortured?' forms the rest of the story. Written by Surya Kumar

Slow yet powerful...Truly a Master Piece...

Mariyaan comes as a serious drama thriller with a strong and soulful love story on the backdrop. The story claims that it is loosely based on the true story about three immigrant oil workers who were kidnapped by the terrorists in Sudan back in 2008.

Let's first start with the back bone of the movie that is the plot it is about two things in life 1.Love and 2.Survival of the fittest. As the two contrasting things the films also opens like two parts one love and coastal life near Kanyakumari and the other is survival life in Sudan. These tracks travel side by side in the film and finally we see the actual soulful merge.

The cinematography by the renowned Belgian Marc Koninckx brings life on the two contrasting terrains of the story 1.Coastal region of southern Tamil Nadu 2.Desserts of Sudan,Africa. His cinematography is simply brilliant which gives life to the story.

The lead actors of the movie rather the pillars of the story were Parvathy and Dhanush. They both have done a scintillating performance. They were brilliant and competing each other. Particularly the lady lead Parvathy Menon of the movie "Poo" fame didn't allow the lead male character Mariyaan to overshadow her skills at any place making us say superb acting. Dhanush is becoming an iconic and most important actor in Indian film industry. He is in the right track and has used this opportunity to grab the next national Award. Other actors Jagan and Appukutty as friends did their parts well. The little odd on characterization was the heroine's father and the hero's mother it was too artificial to look young people with older getup instead they could have given it to some good old character artists in the industry.

Director Bharath Bala is joining hands with ARR after vande matram their duo has worked well and has created the necessary magic through music on screen. As per the songs I felt it good along with the movie rather as an individual album.

Worth mention would be the hallucination scene which brought Cheetah on screen and the underwater sequences were marvelous.

The film's length could have been little less but that does not stop me saying this is a good masterpiece in Tamil cinema.

Verdict: A worth watch movie for real story and acting based movie lovers. Otherwise commercial movie lovers stay away from this flick!!

People usually sit back and relax or even take a break during the songs in a film, but it wasn't the same with Maryan. Audiences didn't move from their seats because even the songs had a story to tell.

Maryan, inspired by true events, is the story of an Indian held captive in Sudan. It featured Dhanush and Parvathy Menon in the lead roles.

Dhanush was definitely an attraction. But the credit can't be handed over to him completely because Parvathy was equally powerful in her role and even the story managed to impress.

Dhanush and Parvathy breathe life into the story.

The cinematography done in this movie is excellent. It's a visual treat for the audience.

A Soulful Tale of Love,Emotions, Pain and Tragedy

"Maryan" a typical movie came out this year with a very strong performance by Dhanush and Parvathy as the lead and also with A.R.Rahman's remarkable music.

Director Bharatbala who did "Jana Gana Mana" album with A.R.Rahman (an Oscar award winner) before given his first directional venture "Maryan" with some soulful love, emotions, pain and tragedy.

A real incident should be equally mixed with strong love and all commercial elements through "Maryan". But it is presented in a slow pace that creates the question "how this movie do well at box office collection?" "Maryan" plot remembers Manirathnam's "Roja" that's a major drawback of story narration by the director. Also the slow pace of the screenplay remembers the style of Manirathnam makings.

The plot is very simple and the scenes should be easily identified by the audience but through strong performance by the lead pair the movie gets more interesting towards the end. First half is packed with full of love and emotions by the lead pair. Second half is fully packed with tragedy and survival.

Dhanush (an award winning actor) has given a solid performance through the character Maryan and gives life to the movie. Definitely this year he should be the one who will give a strong competition to all other actors, those who are hungry to get the National award. As a fisherman and lover in the first half he shows all his skill of acting and as a hostage in the second half he is simply outstanding and brilliant. He goes to his next level of acting abilities through the second half. Especially in sequences like telephone speaking, just before Kadal Rasa song and at the climax portion. He should be appreciated for choosing movies like this after got an award. None of the actor can do this Maryan character except him. Hat's off to him.

Parvathy(who did "Poo" before)did an equally excellent role as Panimalar. She looks very beautiful in the movie and acted very excellent also gives a tough acting competition to Dhanush. One of the rare actresses who plays equal role to hero after a long time in Tamil cinema industry.

Other supporting characters should equally given their best acting. Especially Uma Riaz, Appukutty and Jagan did their job good.

The great plus of the movie is A.R.Rahman's music. Songs are already in chart-busters. All songs are done with beautiful emotions. "Enga Pona Rasa", "Netru Aval Irundaal", "Innum Konjam Neram" are the sweetest melodies "Kadal Rasa", "Nenje Ezhu" are packed with soul and emotions. "Sonapariya" gives the joyful pleasure. BG score also given more support to the movie. Especially in second half A.R did an excellent BG work.

Cinematography by Marc Koninckx is very valuable and shows technically brilliant in many sequences. Scenes like Dhanush waiting inside the sea and desert regions are brilliantly photographed by him. Editing by Vivek Harshan gives equal support for the movie.

Overall "Maryan" is a typical Tamil cinema and it should be appreciated for brilliant performance by Dhanush and Parvathy as the lead and for A.R.Rahman's best music.

Go and watch it for Dhanush and A.R.Rahman.

A Soulful Tale with Emotions,Pain and Arise

Maryan is filled with lot of emotion,pain,struggle and heart wrenching love... Only Dhanush can do this type of role,with his impressing expressions,lovely smile,heart touching emotional scenes,his Hardwork shows in each and every frame,sure another national award is waiting for him.Although the first half will be slow that didn't damage the plot its going very well with cast.Parvathy Wow really stupendous performance from her,cute and beautiful Paru impresses so much.Second half no words to express truly realistic Mindblowing.Cinematography by Marc is major highlight of the movie his powerful lens captures the locations very well,kudos to him also.Editing by Vivek Harshan is sharp doesn't spoil the movie, Bharat Bala came up with an emotional tale of love,he takes Tamil cinema to next level. Last but not least A.R.RAHMAN is there any word to praise him more,songs are very emotional and Marvellous,his terrific Bgm carries the movie as soul to the end.Movie is technically brilliant

Maryan-Dhanush and A.R.RAHMAN steals the show.

Hats off to the entire crew

Go and experience it