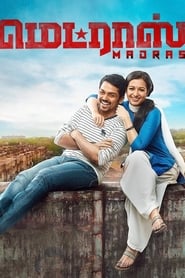 Kaali (Karthi) is the local Chennai guy, the darling of his mom and the most literate person in his gang, he has a happy go lucky life with his best friend Kalairasanand (Kalaiyarasan). Things go wrong when there arises an issue of a WALL that stands tall amidst a chilling superstitious rumor and finally two groups fight around it. Written by Anonymous

Kaali (Karthi) is the local Chennai guy, the darling of his mom and the most literate person in his gang, he has a happy go lucky life with his best friend Kalairasanand (Kalaiyarasan). Things go wrong when there arises an issue of a WALL that stands tall amidst a chilling superstitious rumor and finally two groups fight around it. Written by Anonymous

Dark side of MADRAS

Director Ranjith selection in cast and other technical crew work's out without any fault. All lead and supporting gave the new colour to the Chennai. Supporting actor Kalaiyarasan seems to be a promising one in the future. Composer Santhosh Narayan's delightful music is extraordinary.

After Berlin wall, Madras movie has a dangerous wall. Realistic stunt sequence is trending among the Action lovers and this move doesn't fail to keep it.

Verdict: Welcome to the new colour of Chennai city.

The film encompasses elements like politics, drama, friendship, romance, betrayal, revenge and pride, and is a gripping affair all the way, with just a few minor breathers in the second half when the fare becomes predictable. The first half sets the benchmark pretty high with the tense, action-packed interval segment being among the best this year. Editor Praveen deserves credit for making the first half as taut as it is. Karthi has to be appreciated for accepting this script where he is just a part and not the pivot. This is easily one of his best and his noted caliber as a versatile performer comes to the fore again. In the raw fist cuffs and brawls, Karthi's intensity, punches and slaps appear truly real. Credit to the stunt choreographers too. Madras is definitely high on action!

Story opens with the history of wall.Mari and kannan are the two opposite groups.Kannan had drew his father's painting in the wall and he wants it to as it is.Then karthi and his friends are being introduced as the side of mari.On the way there comes a beautiful love story.Then karthi and his friend anbu tries to the paint in the wall inorder to advertise for election.Soon karthi and anbu are attacked by the enemies.But karthi kills a perumal,son of kannan in fight.Then anbu was killed.Soon karthi came to know that anbu was killed by his leader mari.Then all slum people came to know that mari was cheating them.So mari wants to kill karthi who reveals truth to all.Karthi and slum people made the picture in wall as an ugly one and mari was illtreated.And Kannan also want karthi to be died.But atlast mari was alone killed by kannan's assistant vijay.Then vijay becomes leader.Karthi married heroine and teaches some discipline to slum children.Mean while the wall bears an advetisement of educational awareness.

This North Madras movie is a delight to hear and all the actors and others artists who have contributed to this effect, deserve a pat.

Madras, though on the longer side and venturing into predictable territory beyond a point, stands out for the presentation, the characterizations, the performances and for the unflinching direction efforts of Ranjith.

The movie does tries to preach, but thankfully doesn't stray too much. A film of such genre, with a rag-tag cast usually falls in the hands of a new comer or a struggling actor. So, though it's surprising to see actors like him do it, it feels good to know that they aren't afraid to experiment.

Madras is the right blend of raw action and commercial entertainment with a screenplay that will keep you hooked. Santhosh's soulful music and Karthi's brilliant performance, are other reasons this movie is a must watch.