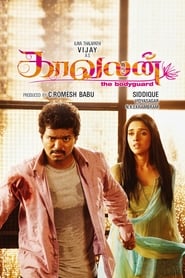 Bhoominathan aka Bhoomi is introduced to us as a person who gets into many local fights. Worried about his future, his family sends him to Muthuramalingam (Raj Kiran), a much respected personality in his place Semmanur, to put Bhoomi's life on the right track. But things don't go as planned. Muthuramalingam's adversary threatens to kill his daughter Meera (Asin) as a revenge against his own daughter's fate. So Bhoomi is given the job of Meera's bodyguard at college. Meera goes to college with her friend Madhu but is irritated by Bhoomi's presence everywhere. So she devises a plan. Written by Anonymous

Bhoominathan aka Bhoomi is introduced to us as a person who gets into many local fights. Worried about his future, his family sends him to Muthuramalingam (Raj Kiran), a much respected personality in his place Semmanur, to put Bhoomi's life on the right track. But things don't go as planned. Muthuramalingam's adversary threatens to kill his daughter Meera (Asin) as a revenge against his own daughter's fate. So Bhoomi is given the job of Meera's bodyguard at college. Meera goes to college with her friend Madhu but is irritated by Bhoomi's presence everywhere. So she devises a plan. Written by Anonymous

A Heart touching love story after a long time in Tamil cinema. The first 80 minute are fast and very funny. Then the movie becomes a bit slow (in a good way). Park scene was very natural and emotional. I did not expect this much twist in a love story. The theater went crazy (screaming in a good way) every five minutes. Vijay was excellent. A movie to show his acting skills. He overshadowed all the other cast. Asin and Mithra looked older than he was. Asin changed a lot (for the worst). She has a plastic face. Mithras's acting was OK. Vadivelu was OK but his stay in the cine-field is definitely going to end very soon. Rajikiran was good. He should work with vijay in another movie with a meatier role.Roja did her part well. Step it up choreography could have been much better (considering vijay skills). Yaradhu was the best (of all the movies released in the recent time. Pattampoochi rocked. All the Songs were well placed in a Tamil movie. Overall, A very good movie after a long time.

The movie title itself says that it involves both Kaval(Guard) and Kadhal(Love)...tats y it is named Kaaval(Kadhal)an. The movie starts with Bhoominaathan(Vijay)'s respect for RajKiran and his ambition to become a bodyguard. His parents will send him as bodyguard for RajKiran as he is wasting time in just stunt and action. But he finally turns out to be bodyguard of RajKiran's daughter Meera(Asin). Meera dislikes him being coming behind her in uniform. She tries to change him by making anonymous calls to him. He falls in love with the unknown girl who calls him(actually Meera). She too falls in love. Finally whether he accepts her or not, when he comes to know its Meera, watch it on screen. Vadivel's Comedy is too GOOD! Music By Vidyasagar also ROCKS! The song "Step It Up" showing his usual talent and a melodious song "Yaaradu" are the TOP 2 songs. Finally for the Incredible CLIMAX, HATS OFF to the Director SIDDIQUE! Totally Ilaiyathalapathy IS BACK!!!!!!!!!!!!!!!!!

Remake of Malayalam movie directed by Siddhiq, himself. 'Body Guard'. Plot: Bhoominathan (Vijay) is assigned to be the body guard of Meera (Asin) and Madhu (Mithra Kurian) by the person who he respects most, the person who has given his name - Muthuramalingam (Raj Kiran). Because of the restrictions of Bhoominathan, Meera get irritated and starts making blind calls to him. Story is not that great and the presentation too. But few aspects of the movie just helps the movie to score well - Vijay + comedy + a soft love story. Yes, film starts a twenty five year back just when Vijay's character is born. (Now a usual sequence in Malayalam films- may be because the writer com director is from Kerala). Story comes to the present tense. Vijay is introduced in a boxing championship but still a low voltage introduction scene for Vijay (Thanks). What followed was a poorly executed action sequence. Then a comedy scene with a dog and Vadivelu (Directly ripped from Priyadarshan's Malayalam movie - Minnaram). I lost complete interest with the movie. Then comes the first song - well choreographed one. The movie should have started from here. Movie picks up its pace well and what followed was a very entertaining first half. Vijay and Vadivelu hits bulls eye with their combo comedy scenes. Vijay's performance is highly impressive and you will watch a Vijay who was missing from theater for many years. First half is filled with comic sequences and second half with dramatic love story and few twists. Movies goes well. Movie works well - its a different Vijay movie, his charisma is back. Siddhiq stick to every Vijay formula but included many scenes which other directors of Vijay movies missed.

Vijay - one man holds the movie in his shoulder all the way. Vijay in a soft romantic role after many years and that works well and will easily reach his most dependable fans - Family and kids. This movie will attract them more than any of his last 10 films. As Bhoominathan, Vijay had 'acted' after a while. He delivers his best in Dance sequences (look out for - Step it Up..). Watch-out for his performance in the scene where he waits for his invisible lover in the park. Wow.. the old lovable Vijay is back. Asin - is just average. Something and many thing is missing in her face. She acted as if she is not interested and this feeling is not avoidable with a lot of close-ups scenes. Mithra Kurian - she looks very homely and does a good job. Rajkiran and Roja - good in their very limited roles.

Kavalan movie starring Vijay and Asin is getting positive reviews from the critics. This film has faced lot of hurdles prior to release and there were so many doubts expressed over the film's release. Kavalan finally got released on 15th January and is getting decent feedback.

Remake of a Malyalam hit, Kavalan has everything in to woo Vijay fans. Vijay, who has been running through lean patch in his career post Pokkiri is back with a bang. Siddique, who directed Malayalam original Bodyguard, is the director of this film too. Vidyasagar's music is passable and is in tune with the story.

Vijay is seen in a completely new avatar in Kavalan unlike his previous masala films. He did a simpleton role which is different from his regular larger than life roles. Asin too did a fine job and has made her reentry into Kollywood count. Kavalan got the positive buzz of the all released in pongal. The trade experts and reviews state that it will reach the hit mark comfortably. Way to go Vijay.