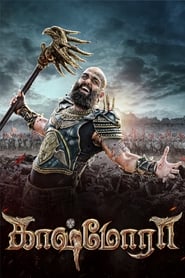 Kaashmora is a present era black magic specialist. Rajnayak is an ancient era warlord and Ratnamahadevi is his queen. How these three are connected? What are the issues arise? How they are solved? forms the story of this historic-horror-comedy movie.

Kaashmora is a present era black magic specialist. Rajnayak is an ancient era warlord and Ratnamahadevi is his queen. How these three are connected? What are the issues arise? How they are solved? forms the story of this historic-horror-comedy movie.

Watch it even if you did already!

Karthi did top-notched performances in both roles. While he is superb in his comic timing as Kaashmora and he did extreme well performances as Raj Nayak. Supporting roles played by Nayantara, Vivek and Sri Divya is quite impressive.

Santhosh Narayanan's mesmerizing music in songs and background score is huge asset of Kaashmora. Gokul (Rowthiram fame) did a tremendous blend of action fantasy and horror comedy. Art direction and VFX is also praise-able. 360-degree (omnidirectional) camera rig first time used in India and its convincing. One time worth watch for spoiler, 3 times worth watch for mass audiences. Watch it even if you did already!

Kaashmora is a decent one time watch for its entertaining comedy but its second half and lengthy duration irritates.

Kaashmora (2016): Karthi entered into Tollywood with his fantasy movie Aayirathil Oruvan and developed a good fan following here.His latest movie Kaashmora is a fantasy horror with periodical touch.This year,Karthi already scored a big hit by Oopiri and aiming for another one.Since its first look Kaashmora has generated good buzz and its trailer looked promising.So how is this Kaashmora?

Plot: Kashmora(Karthi) is a small time crook who pretends to possess some special powers of taking to the ghosts. He cheats a huge politician and runs away with his money.The twist in the tale arises when he gets stuck in a huge forbidden bungalow which has a past of over seven centuries and also some real ghosts and the one named Raj Nayak (Karthi).How does Kashmora gets stuck there ? What is his connection with the bungalow and ghosts ? and where do Ratna Mahadevi(Nayanthara) and Yamini (Sri Divya) feature in this entire set up? That forms the rest of the story.

1)First half: First half of Kaashmora is so entertaining with a lot of hilarious moments.Karthi and his family's con scenes are so funny.Karthi and Vivek are brilliant with their comic timing.Pre Interval scene is the most hilarious part of the movie.

2)Performances: Karthi is the major highlight of Kaashmora.He is brilliant in both roles he played.He provided great humor as Kaashmora and as Raj Naik he excelled.His look is well made and we cant even believe that he is Karthi.Vivek as Karthi's father gave good laughs.Nayanthara looked stunning.Sri Divya is bad in her role.

3)BGM: Santhosh Narayan gave good BGM for this movie.It syncs with the mood most of the time.

2)Second half: After such an entertaining first half,second half is huge let down.It is so dragging with predictable scenes.Flashback episode has good sets and performances but pace is so slow.Climax is silly.

3)Duration: 2hr32 min duration is entirely unnecessary for this movie.Several scenes can be chopped off.

So,Kaashmora is a decent one time watch for its entertaining comedy but its second half and lengthy duration irritates.

First Half is Good

even though i did not expect much of the movie, first half of the movie makes you think there is something interesting going on and second half would be legend. Frankly i enjoyed the first half (all of them were comedy scenes and were good) but the second half is worst because they were senseless and does not satisfy your logic. It doesn't satisfy logic means all the scenes are made without giving much reasoning and some of them are not even related to each other. I suggest you to think of the film comes in comedy genre and enjoy the first half.

Very much a Under rated Movie

I happened to see this on Amazon Prime Video , and simply loved it. The First half was very nicely directed and i think throughout the film the director has maintained to keep the comedy aspect above the horror element. I wish the first half alone was spread across the entire movie , it would have been a full blown comedy movie.

Nevertheless the movie is really nice, didnt expect such a performance from Karti.