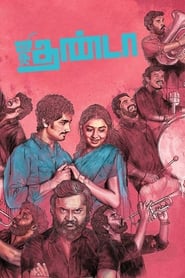 When Karthik is given a task by his producer to come up with a gripping gangster flick infested with heavy dosage of violence, he focuses on Sethu, a ruthless gangster surrounded by quirky yet scary henchmen. Karthik discreetly tries his best to find out about Sethu to develop a film script, but fails miserably in all his attempts. However when he finally gets the chance to gain an insight into Sethu's life, disaster strikes as he gets caught in the mêlée following the discovery of a mole within Sethu's gang. Written by PipingHotViews

When Karthik is given a task by his producer to come up with a gripping gangster flick infested with heavy dosage of violence, he focuses on Sethu, a ruthless gangster surrounded by quirky yet scary henchmen. Karthik discreetly tries his best to find out about Sethu to develop a film script, but fails miserably in all his attempts. However when he finally gets the chance to gain an insight into Sethu's life, disaster strikes as he gets caught in the mêlée following the discovery of a mole within Sethu's gang. Written by PipingHotViews

Jigarthanda is Story telling at its best, you just cannot miss a single frame of this artistic cinema for three reasons

1. I can merely remember any movie which had so many twists lately, if you liked Pizza, trust me, this movie is hundred times better than Pizza

2. This movie is artistic, in terms of how clean shots are engaged with some classic background music, there are some scenes which comply with the BGM, so much so, it takes them to a completely different level.

3. It's all about ACTING, actors in this movie do pure justice to their roll , Specially Simhaa, he nailed the character , and definitely garners admiration from audience.

I dare not talk about story line, in the end, have fun this week watching this splendid piece of cinema, brings roof down with laughter's in some scenes.

When was the last time we were very very satisfied , wearing a big smile and always talking about a movie which we watched? To me it was ages and today i can say that a movie has lived and satisfied a wide section of people of the South. Jigarthanda!!!!!!The Magical drink of Madurai and now the magical movie of the South.

Jigarthanda has promised on the above lines turning out to be a perfect treat to the audience who were looking for a good movie in the recent times. The Hype surrounding Karthik Subbaraj and his 2nd Outing was justified becoming one of the most anticipated movie of 2014 and featuring in the Forbes 5th most awaited movie.

After Pizza, it was a revelation of Karthik Subbaraj having churned out this one. We there more and more words i would like to add in praise of KArthik and his movie but the verdict is already there. Jigarthanda is a blockbuster and an ultimate Winner.

The Movie. Well No spoilers ahead. I want all of you to watch the movie in theatres !!!!An aspiring film maker wants to make a gangster movie and he lands in Madurai in search of an apt Gangster for his scripting. What happens when he crosses in with the most dreaded Gangster of Madurai forms the Crux of the movie.

The Characters!!!! a lot to say about so may people who worked in this Movie.

Bobby Simha: The True hero of Jigarthanda and i can confidently say no actor could have done "Assault" Sethu other than the 7 film Old Simha. Hats off to this young guy to have pulled out the role with Ease. Enjoyed each and every scene of his appearance in the movie and the mere presence of his in the film is more than enough to take the audience for an awesome ride, well this was always the case with our superstars of Kollywood but its Simha!!!The dialogue delivery and his body language speaks its all and he is sure to travel heights. Hats off to this Young Man.

Karunakaran: We have a lot of comedians in Kollywood from the likes of Karunas , GAnja Karuppu to Santhanam but KArunakaran stands out among all and he was a real show steal with his timing and the laughs he evoked in the film. A brilliant sidekick to the hero indeed and no wonder he bagged a role in our Thalaivar's movie. Keep going Karuna you were amazing.

Siddarth: Well he has come out of his chocolate boy image and good to see Siddarth accepting the role even though the movie is mainly centered on Simha. He was cool as usual and he has done his part really well.

Guru Somasundaram: Was he kept under the wraps after Aranya Kandam and Pandiya Nadu? Was Kollywood not ready to accept brilliant people? Well he was one Person whom i really liked and his characterisation was brilliant as the Filmmaking Guru. What a performance it was thoroughly enjoyed each and every scene of his. I wish Kollywood uses these brilliant people to get Kollywood to new heights and use him in frequently in meaningful roles such as AranyaKandam and Jigarthanda. Kudos Sir.

Lakshmi Menen, Ramachandran Durairaj, Aadukalam Naren and Sangili Murugan were apt in their respective roles. Watch out for the Surprises in store in the Vijay Sethupathi Cameo.

Coming to the technicians.

Gavemic U Ary: Brilliant Camera, focus and lighting. I couldn't believe that it was Madurai and it could be shown this beautiful after watching the same old routine Madurai gangster flicks. This one stands out. Without Gavemic's colour and tone the movie wouldn't have been the same as it is now. Its his sheer brilliance that makes this movie complete.

Santhosh Narayan: The beats , the drums the percussions Wow !!!!!!!!!!Awestuck with his brilliant BGM and Songs. Couldn't ask for more. Mesmerised with his sounds and songs.

Last but not the least, Karthik Subbaraj: A commendable attempt and a well written script. You haven't brought in a brilliant story but you have made a brilliant script and transformed it into a brilliant movie. We are asking for more movies of you and your brilliance Karthik. A big thumbs up for you. Brilliant is all i can say.

The thrills , actions , suspense, romance, awesome screenplay, Realistic Acting by the leads and the supporting Characters, brilliant Songs and BGM and an awesome Camera and not to miss the brilliant directing skill of Karthik is the USP of Jigarthanda.

Go watch it only in theatres. Well if you are watching it in pirated CD's you are in for a Big Loss.

My Verdict: Brilliant and Awesome and i go for a rating of 10/10

One of the finest commercial and a well made sensible movie in Tamil cinema. Rarely we see such good movies (last in Tamil being soodhu kavum).

The movie starts off with a aspiring director (and family supports his ambition) being discouraged by a renowned director. As the movie goes on we get to know that a producer who had an ego clash with the renowned director agrees to produce our hero's film. Later we get to know the producer's words were just a gimmick for the public. The producer then sets a task for the hero asking him to take inspiration from gangster epics like Thalapathy, Nayagan, God Father, Scarface, etc and make prepare a script.

The movie then shifts to Madurai where our hero follows a rustic and violent goon named sethu (assault sethu). Then the whole movie is about how the hero gets his script done, unfortunate serious problem in his movie and how he over comes it. First half is very fast paced and the second half drags a bit but the original screen play and the performance of the actors compensates for that.

The star of the movie is the antagonist Simha who portrays assault Sethu. He carries the role with such a ease which is very commendable. His timing makes even a serious scene a bit comical intentionally. Let it be a scene in which he kills someone or let it be the scene in which he learns how to act, he just fills the scene with apt expressions. Siddarth as an aspiring director has done something that isn't his usual chocolate hero kind of role. He is good in his role and is obviously overshadowed by Simha easily. Lakshmi Menon's role is a kind of role which the audience would feel is unnecessary but in one scene she justifies the character and that changes the story flow altogether.

The music director and cinematographer's work in this movie are remarkable. Their part in the creative output is as important as the directors. Karthik Subbaraj has proved that pizza wasn't just a one time brilliance. His movies will be awaited a lot more after this one. The only minute flaw is the running time of 170 minutes. But having said that the director manages to hold your attention in a neat manner.

What starts to be a rags to riches story turns into a gangster movie which in turn turns into an amazing movie with thrills comedy and surprises filled ones. Such movies reinstate our faith in good cinema which shows skin n abuses and gore with mass heroes isn't really necessary to deliver a hit movie. In short the movie should not be missed and if u don't know the language then wait as this movie will surely be remade in many languages! Cheers to the Jigarthanda team. Thanks for making the film worth my money.

The reason I watched this movie is for my favorite Bobby Simha and Karthick Subbaaraj. I stunned with the performance of Simha, he is really amazing and awesome. I am dare to say Simha is going to be finest actor in Indian cinema if he is continue to do the different character as he did so far. Even I am dare to suggest tamil old actors like Rajini, Kamal, Ajith, Vijay to learn what is real acting from Simha. Simha is really great great. Am damn sure he is one of the best actor in Indian cinema. Particularly I am mesmerized when he change over his acting from don to normal man and normal man to don, especially when he ask Siddarth with knife in his hand, "pakathula vandhavudanae bayam poiduchaa", this performance is epic. And another grooving performance is, when Simha receives credits from the child of Soundhar, Simha's eyes itself conveyed the movie climax, thats why director orchestrate all the dialogue in gibberish in the climax, only few actors can do that performance and only good movie lovers can understand what Simha is expressing.

Apart from performance all credits goes to director. After Pizza the expectation was much higher on Jigarthanda. But after Jigarthanda what Karthick is going to do. lets wait and watch. Hope Kartick will come with another surprise in his next movie. But am damn sure, Karthick himself can not make flick like this again, it is a once in a life time script. I admire Karthick more than Bala, Manirathnam. Because Karthick is more intellectual director than them.

And last credits goes to composer Santhosh and cinemotographer gavemic u ary. Hats off to them. Great work.