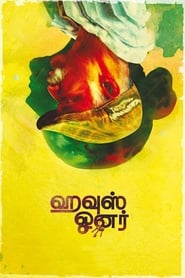 Vasu, an old retired army man is diagnosed with Alzheimer's disease and his Radha finds it hard to handle him and his childlike nature during some times. They go through some unexpected problems in their house during a rainy season in Chennai. Written by Santhosh

Vasu, an old retired army man is diagnosed with Alzheimer's disease and his Radha finds it hard to handle him and his childlike nature during some times. They go through some unexpected problems in their house during a rainy season in Chennai. Written by Santhosh

It is raining cats, dogs and snakes outside. An elderly couple breaks into an impromptu dance in their kitchen. This sequence is intercut with a dance performed by the same couple at a much earlier phase in their life. There is an adorable moment when the elderly lady can't quite hold a pose. But she tries gamely. She is in a state of bliss amidst the seemingly huge imperfection that has marked the couple's present state - the husband, a retired army officer, is suffering from Alzheimer's. And then, he suddenly snaps out of the wondrous reverie. He can't recognize the lady as his wife. What is still imprinted in his mind is the image of the much younger girl that he fell head-over-heels in love, even if the marriage itself was arranged. In a fit of disgust, he throws a tantrum and some flour on the wife for good measure. The wife loses her temper but only for a split-second. She knows that it is not the husband's fault. Amidst the heartbreaking moment, she focuses on a practical detail - she has to change. Life has to move on. It is this kind of detailing that sets Lakshmy Ramakrishan's "House Owner" apart. The nuance not only brings the drama to life but also right next to us.

This couple - essayed by Sriranjini and 'AadukaLam' Kishore as the elderly pair and Lovelyn Chandrasekhar and 'Pasanga' Kishore as the younger version - becomes imprinted in our minds slowly but surely. The wide-eyed wonder of the younger couple is a stark contrast to the world-weariness and exhaustion of the older pair. This is never expressed in any dialogue. Even the transitions between the past and present are done seamlessly, purposefully. Seemingly incidental details like a non-existent snake in a pond assume gargantuan proportions later on. Minutiae like the fear and apprehension of Lovelyn in the darkness and the subsequent role reversal as they age are just put out on the screen but never force-fed to us. In that sense, Lakshmy Ramakrishnan trusts the audience to pay attention and to be patient - the details unravel gradually (as they should), not in a rush.

She reposes the trust of the audience manifold in the concluding portions, which play out like a thriller, one that makes our hearts ache, not race. There was a point in the climax where I turned my eyes off the screen, for the tension was unbearable. Without spoiling the movie for you, I will just say that the images and sounds are bound to haunt even the heartless viewer.

M Ghibran comes up with a background score that is just about the perfect complement for the images on screen. And the images themselves? The art direction (by the director herself with Captain Chandrasekar) and the cinematography by Krishna Sekhar are in sync in a way that would make the PC Sreeram - Thotta Tharani pair of the '80s proud. If you think that that is hyperbole, then you haven't watched the climax of this film closely. The technical brilliance of the crew behind the screen is matched by the ability of the actors on screen. Sriranjini is the prime reason the climax works so powerfully. Lakshmy Ramakrishan's voice work perfectly suits her- the Palakkad-accented Tamil is lovely to listen to. (My favorite line - "Nelam ellam vallam!"; translation: the floor is full of water!) Kishore (Senior), through his circumspect body language, essays the retired army officer role with much assurance. His best performing moment comes in the aforementioned dance sequence. The younger couple too strike an easy, likeable chemistry. Kishore (Junior) nails the 'ponnu paakara' scene - the way he silently expresses joy with a suppressed smile seeing his wife-to-be is wonderfully done. And Lovelyn is excellent in the party scene where she conveys awkwardness without overdoing it.

(Spoiler ahead) - I had an interesting conversation with a friend, who wished that the ending was positive, that the film could have ended with a ray of light, that could have offered hope to couples where one is suffering from Alzheimer's. Of course, the way a tale concludes is the prerogative of the writer. What I took away from the movie was encapsulated in a scene featuring Lovelyn and Kishore. The latter, having returned unscathed after serving in the army, mentions to her that given the uncertainties of his profession that it is his intent to enjoy every minute that life affords them. It's a beautifully written scene, one whose seriousness is punctured with a delightfully sweet response from the wife, who admires the English spoken by the husband than paying much attention to the content. But as a viewer, I thought of this scene during my chat with my friend. Life is sometimes shorter than we plan for it to be. And it behooves us to savor every moment by loving our loved ones deeply. This is stated explicitly nowhere in the film. But the magic of the medium is such that the same film plays differently for different people. As much as I felt a strange sense of upliftment during the bittersweet ending of the director's previous effort, "Ammani" I was thankful (for the lack of a better term) for the poignancy evoked by this film's conclusion.

I admired the director's debut feature "Aarohanam" quite a bit. I enjoyed only parts of her sophomore effort, "Nerungi Vaa...Muthamidathey." I was stunned by "Ammani," which I reckon, is her best film yet - the "Seththathu Saalamma" line knocked a punch in my gut like few other movies have managed. "House Owner", her fourth effort, is a profoundly thought-provoking experience. It doesn't have the more instantly accessible pleasures of "Ammani" (like the irresistible "Mazhai Ingillaye..." song). But it is a mature film that wants to go deep into the minds and hearts of the lead characters, and by extension the audience. That it succeeds handsomely is a testament to the vision and conviction of the filmmaker.

The protagonist of "House Owner" may have suffered from Alzheimer's. But it will be nigh impossible to forget this movie.

A Hard-hitting Pure Love story based on Chennai Flood

A Hard hitting Love story based on Chennai Food... Once Again Lakshmi mam came with great script... The movie was very depth ... The Love between Radha and Vasu was pure ... The flood scenes was soo real ... Both Kishore other leades Performed well 😊👍👍 A Must Watch

Beautifully portrayed the unconditional love of a wife for her husband..simple but perfect..no flaws at all..lived every bit of the movie..adult couple were the best with lakshmi Mam's voice.

This film make me to learn the true love, the real true means what.