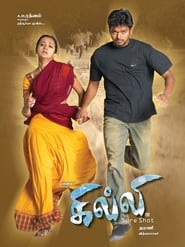 Muthu Pandi, a village strongman, decides to marry his niece Dhanalakshmi, and begins his quest by eliminating everyone who opposes their union - starting with both her brothers. In desperation, Dhanalakshmi decides to escape from the village, and in the process is unwittingly assisted by a university Kabaddi player Velu. Written by Joyojeet Pal

Muthu Pandi, a village strongman, decides to marry his niece Dhanalakshmi, and begins his quest by eliminating everyone who opposes their union - starting with both her brothers. In desperation, Dhanalakshmi decides to escape from the village, and in the process is unwittingly assisted by a university Kabaddi player Velu. Written by Joyojeet Pal

Gilli Gets 2 Thumbs Up!

If you have seen the Telugu version of Gilli "Okkadu" you will find this to be very similar in story line, but Gilli has different songs and takes place in Tamil Nadu not Andra pradesh. Although this is a remake of "Okkadu" you will find that Vijay and Trisha make this a unique film, Vijay and Trisha make a great pair. A few negatives were when Vijays character slaps Trishas character for going to buy a present for him, he never apologizes and she still stays with him in the end. Good action and songs make this an all around great movie I recommend it.

Play the Game of life...

Ghillie a remake of the Telugu "okkadu' is thankfully a clarified version of the original. It packs the same punch and Dharani true to his cinematic brilliance delivers it with style and panache. A flagging Vijay's career with the entry of the likes of Surya and Vikram on the fray, got the much needed uplift with this movie. This might well prove to be the best movie Vijay has ever been on, considering the choices he has been making since then. The hard-working actor seems to have lost his bearing what with talented new entrants being accepted both by the industry and public alike.

The tightly snug script, which runs at, a neck-break speed revolves around Velu, a willful youngster aspiring to make a mark in the game of Kabaddi( a popular game among boys in India). The events following the chance encounter with Muthupandi, his rescue of the girl in distress and how he juggles with the aspirations of his friends and his own forms the fulcrum and end of the movie. Vijay fits as a 'T' into the role and essays a subdued and believable portrayal of the boy next door.

Trisha has more than a stereotyped Tamil heroine mantle to play. The role is far more complex than just a girl in trouble. With limited dialog's, Trisha exploits her occasional muted expressions and subtle vulnerability to add color to the role. This is a classic case of a cover page girl coming-of-age to become a professional actress. Trisha became my personal favorite after this movie.

The movie ends on predictable lines, although one has to credit the Director for keeping the audience guessing on many things including Trisha's change in decision to leave the country. Prakash Raj deserves a word of praise for providing the perfect counter-weight for Vijay's role. His almost indomitable stature in the role of a villain and the apparent chinks in the hero's armor form a perfect ploy for keeping the audience guessing.

Overall this is a great movie that deserves at least a single viewing. I give it a clear 8 out of 10.

Am an ardent Vijay fan. I have never seen another movie of his which is as good as this.

It has all the regular clichés that one can expect from a commercial entertainer. A hero who is bad in studies but a star in his forte i.e.Kabbadi. His friends to fill in the comedy quota. A heroine in a life-and-death situation. A villain, which I say is the best ever portrayed by the protagonist. High octane chase and action sequences. Music that can make one dance. And above all that a perfect storyline to keep all the above factors within an enjoyable circle. Perfect.

The director doesn't give any chance for the audience to loosen up. He just goes on from one nail on the head to the next. And one can see the lighter side of Vijay in this film which he rarely executes.

All said.....This movie was and will be perfect for many years to come....

The word Ghilli actually means a small sharp wooden game instrument that is used in a game called ghilli-danda (a precursor to Cricket) in India. The use of the word as nickname for the principal character is stylish, as it signifies one who is sharp, fast and can hurt badly when rubbed in the wrong way.

Ghilli is one of the best movies for Vijay and in it is unrivaled in its pace and action. The movie never slacks for a moment, and keep you always with some exciting action. The movie is set in Madurai and Chennai and its story core is simple. A rich landlord tries to covet a beautiful girl in his town, and his unquestionable power and authority, prevents the girl from seeking a justice. The hero tries to rescue her and the majority of this movie portrays the week in which all this action happens.

A very exciting movie and though the story is nothing new, the director and the actors receive praise for the full-paced action.