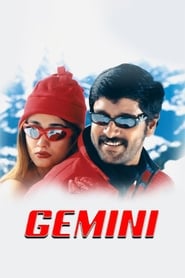 Gemini (Vikram) is a hoodlum, who lives off extortions and petty crime. A brief love affair with the new girl on the block (Kiran), leads him on a path to reform, which ultimately pits him against the local goon Teja (Kalabhavan Mani). Written by Joyojeet Pal

Gemini (Vikram) is a hoodlum, who lives off extortions and petty crime. A brief love affair with the new girl on the block (Kiran), leads him on a path to reform, which ultimately pits him against the local goon Teja (Kalabhavan Mani). Written by Joyojeet Pal

This film got released during my PG days in 2002. But, I happened to see it only after 2 years. I thoroughly enjoyed the movie and it remains one of my all time favorites ! ! Vikram has given a good performance as a toughie named 'Gemini' . He tangles up with another baddie 'Teja' PLayed by the talented Kalabhavan mani. The story of how Gemini ousts teja on his way to transforming in to a good guy is told in the usual saran way.

Now, my opinion about saran is that he is the most underrated director of Tamil film industry. He is a hugely talented director with a comic gift of penning taught screenplays which really make his films a treat to watch. If u notice keenly, all his films have a very small story which can easily be written on the back of a stamp. But, his screenplay makes the movie very interesting. Take movies like Kadhal Mannan, Amarkalam, Parthen rasithen and even Alli Arjuna. All these movies are hits and u can see that's only because of his superb screenplay which makes the viewer tied to the screen.

Here too, he has handled the treatment exceptionally well. This movie stands out from the rest of his films, and I personally consider this as a masterpiece from Saran. I didn't find even one single scene boring and I 've seen this many times, since I first saw it.

Another thing to be mentioned with saran is that his bonding with Bharadwaj. They both have combined together to give many superb hits. In Gemini too, almost every song is a super hit. The background music has also been wonderfully composed (especially when Teja makes his entry and the college fight scene).

Kiran makes her Tamil debut with this movie. The comic pair of Dhamu and Vaiyapuri combine together in this film too and have provided a tickler ! ! Charlie too comes for some scenes and does justice for his role.

Kalabhavan Mani plays the villain and has done en excellent role. He has used his mimicry skills to perfection in this film and has provided wholesome support to Vikram.

This movie went on to become a blockbuster hit for Vikram and was re made in Telugu also, starring Venkatesh.