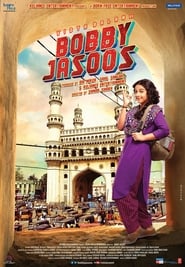 Bobby Jasoos starring Vidya Balan, is a film that celebrates the aspiration of Bobby, who wants to become the number one detective in the old city area of Hyderabad. The film is directed by Samar Shaikh, produced by Dia Mirza and Sahil Sangha under their banner Born Free Entertainment and is presented by Reliance Entertainment. Bobby Jasoos releases on July 4th,2014. Written by Official Agent

Bobby Jasoos starring Vidya Balan, is a film that celebrates the aspiration of Bobby, who wants to become the number one detective in the old city area of Hyderabad. The film is directed by Samar Shaikh, produced by Dia Mirza and Sahil Sangha under their banner Born Free Entertainment and is presented by Reliance Entertainment. Bobby Jasoos releases on July 4th,2014. Written by Official Agent

Mahima A as Amna Audition 3

Two and Half Month Draught was over

...........Bobbie Jasoos:3.75/5 Finally the 2 and a half month drought was over.....After 2 states, I went in and out of the theaters to watch something new and good....but disappointed....This time juss keeping in mind that it is a Vidya Balan starer, I started watching the movie, It started Tickling me, giggles, sometime louder ones escaped my lips....so the first part was so full of laughter doses...It was all about Vidya Balan and her acting credibilities.....she wooed me again, simple lines bought to perfection by the Stunner Vidya....As the story Proceeds, It maintains its pace between comedy and the detective part. The twist and turns were simple but created perfectly, and were beautifully portrayed by Vidya.....The Story was simple and subtle, Mughalpuri was Colorful...But Ali Fazal was Like a Ace ....He should get more Films....The pairing was So beautiful, that their age difference was hardly noticeable.....She was Supported by an excellent Supporting star cast Of Supriya Pathak, Zarina Wahab, Tanvi Azmi and Rajesh Gupta...Each and every one of the Supporting crew acted really well.....Director Samar Seikh Did a good job....Applause...Among the tracks....Sweety an Arziyaan my favorites....

Definitely a Must watch.....For Vidya Dons various Disguises and roams around MughalPuri with grace.....

On the whole good movie made. All the supporting actors chosen were good. Good to see kiran kumar after long time.vidya balan ( ulf lady Bachchan ) played the role with ease.

Songs in these movies sometimes I believe looses the momentum. Producers also need to have faith that movies can sell without songs.

Direction and scripting could have been better.

One question keeps coming to my mind, why was kiran kumar specially shown carrying a gun to meet ali .... there is no logic . Director forced the audience on something which was un reasonable.

Its 6 star but 1 extra for attempt for trying to make a normal cinema. Dia mirza and others its good having faith on such movies.

The realization you gather that the whole film could've been done without the title character is ironical. But then the makers would have been jobless and also, the people behind other departments of this film wouldn't have got the opportunity to showcase their talents.

The film is built on a make-believe story: an aspiring female detective finds herself defying odds and in between a mystery where a rich boss hires her to find three specific people. The climax succeeds in disclosing this mystery but it is foolish enough for the audience to actually believe it; the story I mean. That is where Bobby Jasoos stumbles.

The first half is brilliant, funny and entertaining. It creates an aura as Bobby (Balan) spearheads her character with blink-and-you-miss multiple characters, donning various colorful costumes and masquerading as a beggar, astrologer, peon, what-not. It is evident that the film was written with Balan in mind. Rest of the cast are equally supportive of the narration. The screenplay is sweet: while the first one hour is used up to narrate the life of Bobby & her family and her acquaintances, the second half is averagely gripping. It never bores.

Art dept., costumes, make-up, locations & technical dept. all are top- notch. I couldn't bear the songs but they are negligible. There are at least 3 scenes that can be counted in some of the best films sequences in Bollywood this year.

BOTTOM LINE: I hate to sound equivocal. So, Bobby Jasoos is a definite recipe for entertainment, but falters when thinking movie-goers find and deride and ridicule and debate the pretentious story it so heavily depends on. Balan fans rejoice. Watchable!

Can be watched with a typical Indian family? YES

Bobby Jasoos - half baked, self pretentious attempt by director but a bold attempt to do something different

While my choice of genre doesn't really allow me to digest modern popcorn blockbuster Bollywood movies, I often tend to enjoy them occasionally if served with a good story and execution. I will have to say that Bobby Jasoos was not one of them.

Bobby Jasoos seems to be a half baked, self pretentious attempt in directing by Samar Shaikh and endorsed by Diya Mirza as a Producer, whose skills could have been better utilized as an actress to save this movie a little.

The story of Bobby Jasoos is about a 30 year old Muslim girl named Bobby, residing in the heart of Hyderabad city near the iconic Charminar. While she keeps herself involved in investigating cases in night and trying to get a proper detective job in daytime. She is having a rough time in securing clients as a detective, but luck takes a big turn as she receives an assignment that pushes her to her limits. Rest of the film is a riot as she tries to struggle her career as a detective and manage her family emotionally who doesn't seem to be in favor of what Bobby does.

While the film seems to have so much potential what makes it fail is the treatment. The film starts of in a humorous tone and actually seems like to begin with the right foot. But as it picks up pace we are introduced some of the people that seems like a cliché examples of typical characters from all of the Bollywood movies I detest watching. Slowly the viewer is faced with slapstick humor, family drama and been-there-done-that events that feels like Deja Vu in the course of a family drama movie.

Songs don't help either. Neither of the songs in the film leaves an impression on the viewers mind, rather give them a chance to take a break and catch up on sleep while they are at it. There is one particular song in the movie which I won't specify to stay away from spoilers, and which I personally think was totally uncalled for in the situation. Perhaps the pacing or editing could have been a lot better, so as to give the movie a coherent flow.

In this movie Vidya Balan in the role of Bobby gets to change in a lot of getup (around 12) but most of them doesn't help the story in much ways. It looks as if she was made to change just for the sake of humor. While the film can be considered short at just 121 minutes, it feels somewhat dragged occasionally, and fails to let viewers invest their emotions into any of the characters except of the lead character.

That being said, the film does have its moments but those are just a few. I would also say it was a daring attempt to try to execute a movie with only a female lead, who for the most part remains out of glamor, and where she is also shown to break free from many of the stereotypical role a women is portrayed in Indian movies. I would also have to admire Vidya Balan for his acting skills as he was very convincing in all of those getup she did on screen. I would not blame the execution of the movie on her since the onus of the complete movie lied on her shoulders alone. And she did her role perfectly.

It would be fair to say that while the first half of Bobby Jasoos, raises viewers interest a little, second half helps it raise even further, but the final twist fails to live up to the expectation.

One more movie "Queen" was also released recently where the story was about a female lead who is shown to break free from various stereotypical roles, but it would be unfair to compare both of them, because while Queen was set up in vibrant and colorful foreign cities like Paris and Amsterdam and was more closer to today's generation, Bobby Jasoos relates more to India and typical Indian family drama, and was filmed totally in the streets of semi urban parts of Hyderabad which gave the movie a special flavor of India, more closer to most of the people of the country.

Combined with all other things I would rate the film a 6 out of 10. Extra 1 to give Bollywood a break from the male dominant masala movie and an attempt to create India's own Sherlock Holmes.