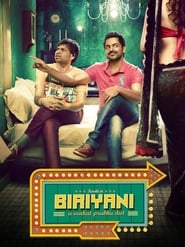 Karthi (Sugan), is a playboy who seems to have had a style makeover with his trendy clothes, new hairstyle and colored eye lens. Despite having a gorgeous girlfriend Priyanka (Hansika), Sugan flirts with all the pretty women he meets and they too, are besotted by him. Sugan, on a journey with his childhood friend Parasu (Premji) stops at a roadside eatery for biriyani (food), his weakness. But they gets into a problem after having the dish. Written by Surya Kumar

Karthi (Sugan), is a playboy who seems to have had a style makeover with his trendy clothes, new hairstyle and colored eye lens. Despite having a gorgeous girlfriend Priyanka (Hansika), Sugan flirts with all the pretty women he meets and they too, are besotted by him. Sugan, on a journey with his childhood friend Parasu (Premji) stops at a roadside eatery for biriyani (food), his weakness. But they gets into a problem after having the dish. Written by Surya Kumar

Well its safe to say that this movie was made for young men in particular. The family seated next to me and my friends mysteriously disappeared twenty minutes into the movie.The first 40 minutes is full scenes that will make you laugh if you are a Prem G fan or weep in agony if you are not. Its been a while since Tamil cinema gave us a who on god's green earth killed him thriller, so i guess you can let the first half pass. The Second half is much better than the first one and i must admit i was shocked when they revealed who the killer was. Karthi has had a lot of practice playing these Masala roles so he does not disappoint. Mandy Thakur got the biggest cheers when she came on screen(no surprises there as the audience was mostly male). You Tube Puyal Sam Anderson,Jai and a host of other Venkat Prabhu regulars make appearances here and there. The music was a major plus.It helped carry the first part of the movie and added a lot to the second one.In short, you can go for this if have nothing else to do.

This Venkat Prabu diet got my stomach upset or I'd say my mind upset. Considering the directors' previous movies this one is pretty ordinary. Yuvan was surprisingly let down comparing with the past Venkat Prabhus' (couldn't believe). Can't understand the addition of too much western classical with the BGM like Wagner's Here comes the bride, Handel's Messiah, Beethovan's Ode to joy etc. Too much spoofs in the movie. The first half was nasty with all the supporting casts wasted, imo. The comedy were predominantly forced with too much Premji's presence. Comical Scenes from 21 Jump Street were also copied.

The biriyani was still tasty in the second half esp. the amazing last 10 minutes that shows the actual Venkat Prabhu and saves this diet. The bottom line : A one time watch (few scenes not for kids due to sensuality/ drinking)for guys to enjoy some dark humor and a splendid climax.

Two friends unknowingly involved into a crime scene lead to a mystery.

Biriyani is definitely an entertaining movie. Karthi made his good comeback. Venkat Prabhu proved him once again as a Entertainer guarantee. Anyhow screenplay is bit similar to his previous Mankatha. VP also made some actors in unwanted cameo appearance for some sort of commercial appearance. New type of climax make you to feel Biriyani as a worthy movie. Cinematography Sakthi Saravanan made a good job and provide us a good color recipe. Editor Praveen & Srikanth made brilliant work which made a huge support to the movie. As his 100th movie Yuvan made some new type of songs & BGM which suits the story line perfectly. Cast including lead & supporting actors done their roll well.

Biriyani is mysterious comedy thriller with some interesting twists.

To begin with, this film starts off with an absolutely different and fantastic opening with Karthi and Premgi trying to figure out their plight at the moment. As soon as the first song begins, you can already sense how different and fresh the film making is. As the story progresses, the audiences are revealed with the further details and characterization of the characters and story in an absolutely different manner. Then comes the intermission, which adds up the interest in the plot. In the end, director Venkat Prabhu hints an upcoming closure, which is then indirectly explained to the audiences. In a totally new style of film making, Venkat Prabhu has established himself as a trend setter and an absolutely creative director. Overall rating: 7.7/10 (68%)