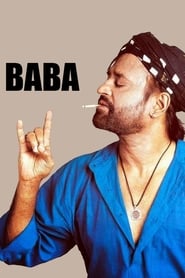 Baba (Rajini) an atheist, by a twist of fate, acquires magical powers from a divine source and takes on crooked politicians.

Baba (Rajini) an atheist, by a twist of fate, acquires magical powers from a divine source and takes on crooked politicians.

It's an amazing movie for those that understand the deeper concepts within the movie about spirituality and the layman desires. Songs, action sequence is just included as a distraction. At the core of the film, it is great as it talks about the real struggles between man and the divine.

It is not a masala entertainer but actually a movie that make people think deeply. Highly recommend for people who think and reflect. Goundamani's comedy is amazing and Rajini kanth as Baba is superb. Since it is the actor's story, screenplay one can see a very honest portrayal. This movie is not for the average movie goer but it is still a great movie.

The movie is awful, atrocious, ridiculous, silly and a slap on the cine goers face. Rajni has made other entertaining movies, but has failed miserably in this venture. Avoid seeing this movie at any cost. Please don't even try watching this movie to assess how bad it is. You will be wasting your time as much as I did.

This is without doubt Rajnikanth's worst movies ever. The first part is held in place with solid comedy from Goundamani but it progressively gets worse and worse and completely illogical. Our hero also takes a dig at Saints with the same name (Baba) through a corny and utterly lame one-liner. The first half has Rajni uttering his usual array of oneliners and style and in the second half, becomes a quasi saint after a beggar takes him through a interdimensional portal to the Himalayas where Babaji (not the famous Saints he took a dig at earlier) gives him special powers for no apparent reason (other than karma). This is really starting to get interesting now isn't it?

The rest of the movie is about him wasting his magic boons and powers and fighting off politicians and related black magic. The usual predictable crap with hilarious implementation. Oh and the black magic never worked on our hero because he just happened to have a Param Vir...er....Shakti Chakra with him. The bad guys and the usual politician villains are clichéd, overworked and in the end, completely insignificant to the plot which itself doesn't go anywhere.

But despite all the flaws, it was fun to kill time with and yell Baba related one-liners during public events. Its also fun to watch others curse about this movie. AR Rehman is said to have composed the tracks for his movie through the cell phone. Thats how important he considered it.

Rajni is very popular in Japan and he has included two characters (one of them is called Keiko...why not Samsung?) of Japanese origin in this movie just for the sake of it. But the way they are portrayed, dressed and treated is absolutely pathetic. The Japanese may stop watching Rajni movies after seeing that. This movie was probably promotional material for Rajni entering politics but the results of the movie itself would have killed off any of his political dreams.

Fun if you turn your brain off though.

Not the best of actors' movies.The director has concentrated on projected actor's stardom rather than giving a good entertainer. May be hero himself, his family and his sincere fans can enjoy it.But definitely it's not worth for neutral audience.The fight sequences are a total comedy.The dance moves in the song sequences are pathetic. The music is average.This film was the biggest flop for the actor. Inspite of the hype created over the movie, the movie failed miserably. Don't even think of watching this move even if you want to kill time. You can watch some cartoon instead.A good movie buff cannot digest this crap for 2 1/2 hours.