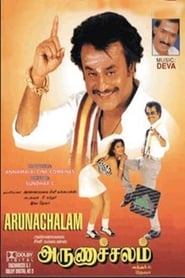 The movie revolves around Arunachalam (Rajini), who is the son of the VIP of a village who finds out about his past but destiny has its own play.

The movie revolves around Arunachalam (Rajini), who is the son of the VIP of a village who finds out about his past but destiny has its own play.

Summary of the story

Rajni comes from a village to chennai only to realize he is a son of multi millionaire. His dad's will states that "If Rajni does not turn up for a long time, the wealth should be donated to a charity. If Rajni turns up he should spend a huge amount (30 crores INR) in 30 days. The money should not be gifted or converted into any other form of property". The charity is in the hands of wrong people. So though Rajni is not greedy for money he accepts the challenge of spending 30 crore INR in 30 days. The rest of the story is about how Rajni manages to succeed in thwarting the attempts of villains (charity owners) and accomplishes the task.

Darn, anybody would never even bother to regard this movie as a marvellous one from the one-and-only idol, Rajini. Think about it, where can one could get dangerous creatures from his back? And how one explain destiny was arranged simply when a sexy lady walked passed by the desk(i.e. the rolling talisman bead scene)? I'm a non-Indian and I regard Rajini along with the likes of the legend MGR,Kamal Hassan n somehow Sathiyaraj as my fave quartet of Tamil hero icons. Arunachalam is parallel to any cartoon or cheesiest to the core. But,if you have nothing to do for over 3 hours, kill your time with this movie. The thing about Rajini is that he would always start from the scratch i.e. he would be doing the-odd job, a poor fella, etc. This is what captivated a fan with his character. All day normal guy. And Rajini did the action, jokes n of course the trademark 'swoosh-swish' thingy in an ultra-cool way.So much for hype, but then again, picture this. His current movie Chandramughi is the longest staying movie yet in one of the cinema in my resident town. Still holding queue since 14 April. And still there are people wondering why he's a superstar. Enough said.

ARUNACHALAM is the movie with the hide and seek which the couples are doing but the hero is constantly following the trail set by others for the deceivers who are being deceived at the same time by the rest. We have learned that ARUNACHALAM is well received for those park sequences that are a turning point to narrating a story or ritual about the "I" without the help of psychoanalysis and a third sense of the 'death of the author.'

Was it remade from Brewster's millions?

Rajinikanth sells. Period. Maybe just another mindless masala movie churned out from kollywood, but still makes for an interesting watch. I just realized this movie was a remake of 1985 Hollywood flick, Brewster's millions. Nonetheless, every tamilian(The Japanese are big fans too I hear) with a television would have seen it at least 10 times and frankly, it's hard not to like Rajini's style on screen.

The story involves a dual role father & son played by Rajini wherein the father wants his son to spend 30 crore rupees in 30 days to understand the value of money. The catch is he should not accumulate any assets in doing so and also no one should know about the challenge he has undertaken. Whether he achieves this or lets his father's empire fall into the evil hands of his father's charitable trust run by crooks forms the crux. As always there's also the regular triangle love story, song and dance extravaganza and sentiment so the audience isn't disappointed.Decent watch!