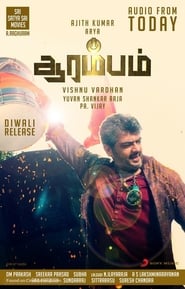 The story is set in Mumbai. AK alias Ashok (Ajith) a former bomb disposal specialist and a Dirty Harry type who shoots-the-scums of earth is on a revenge romp. Along with his lady love Maya (Nayanthara), he forcibly ropes in a computer hacker Arjun (Arya) and his lover Anita (Taapsee) into his nefarious plans. How they take revenge on the Home Minister (Mahesh Manjrekar) and his acolytes ( Atul Kulkarni) forms the rest of the story. Written by Surya Kumar

The story is set in Mumbai. AK alias Ashok (Ajith) a former bomb disposal specialist and a Dirty Harry type who shoots-the-scums of earth is on a revenge romp. Along with his lady love Maya (Nayanthara), he forcibly ropes in a computer hacker Arjun (Arya) and his lover Anita (Taapsee) into his nefarious plans. How they take revenge on the Home Minister (Mahesh Manjrekar) and his acolytes ( Atul Kulkarni) forms the rest of the story. Written by Surya Kumar

ARRAMBAM a blockbuster script with mass crowd puller Thala,attractive Arya.I think Vishnuvardhan made this movie in full cool with confident and made this movie a big Blockbuster . Garenty that a big action sorry stylish Action of Ajith,Fun of Arya,rude action of Nayanthara,Attractive Tapsee and om Prakash cinematography capturing perfectly every thing.

The story star starts with Thala bombing various building in Mumbai city who comes out like a terrorist then it is carried out by Arya who is a Hacker.college comedy of Arya as a Fat boy worked out. Ultimate makes Arya to do his jobs in a gun point. unsatisfied Arya traps Ajith to Mumbai police are the first half with good flow.Then stars the second half which decides the ARRAMBAM as a blockbuster

There are plenty of Scene which makes us to go for the movie for second time.The opening of Thala was normal,the notable thing is Thala dance in first song where a man with these many operation,accident had made it with full energy(great).Thala boat ride "can any hero in Tolly,Bolly even Holly"repeat it today even young Sixpacked hero's says i cant risk my life for a bike ride with rope all over their body you may say Thala is a race so he may do it then u must be accepting the fact that "he is a fearless mass hero".In one scene When the Ducati bike was shown the whole crowd went up but it was a normal ride like other hero's even though the whole crowd went up till the end only because it is Thala.

Director loved Thala Soo Soo mush he brought every thing out of him but with 4 to 5 risk scene which was "Marana Mass" I thought how could Thala do it "Thala has every thing money good wife and family" but takes a risk shot does every thing for fans but do not want to have a fan followers.What is this Thala? Every day fans will be increasing for u Thala But we doesn't want you to risk too mush.

Not only because of Thala the story made with every other character is also engaging. Tapsee was top in acting.There was more Editing mistakes and even the rerecording in some scenes were too bad.For those who want to learn from movie you can learn how to engage the crowds and the beautiful CG work in song and in action scene.Other than that this is a normal Blockbuster movie which comes out every year for nearly a Decade which has no formula why it is Hit.You would be the only persons in theater thinking that am i sitting in a Blockbuster movie.This movie is only for Public

ARRAMBAM is a movie which cannot be stopped from its Blockbuster.But it is not the new beginning For THALA,Vishnuvardhan or TAMIL CINEMA.

Ajith once again has proved himself in this most awaited movie of this year.Director Vishnuvardhan, Subha and editor Sreekar Prasad have to be applauded for their interesting script and editing that keep the audiences hooked to their seats throughout the movie.

Ajith's screen presence is mighty as ever, and his classy salt and pepper looks and colorful V neck T shirts suit his character very well. The stunt choreographers, Jegan, Kecha and Lee Whittaker, take the credit for the numerous action set pieces and it is slam bang all the way. The entire crowd watching the movie rises to clap when Ajith dives out of a van onto an approaching car and zooms around in a Ducati. Ajiths gesture and shades delight the audiences throughout the movie.

Rana's portion in second half along with Ajith is a highlight and is sure to grip the audience.Arya is energetic and spunky as ever and has done his part well. Kishore as the honest cop has done his job very well and receive applauds for his performance in the climax.

Yuvan's work on the BGM has added enough muscle to the tension and action in the movie with his score.

Om Prakash's work on the camera makes Aarambam as a slick and glossy commercial action entertainer.

On the whole Aarambam is a perfect treat for all Ajith fans and to the general public.

Vishnuvardhan is one of the very few directors who knows how to extract the best from Ajith and what exactly people like in him. He has written the screenplay accordingly and given plenty of scope for Ajith to impress the audience. All the little mannerisms, the 'Ducati' bike ride, racy boat chase sequence and the climax dialogue are few examples. Dialogue writers Subha have kept the dialogues really simple and catchy. Kudos to Vishnuvardhan for touching up on the Mumbai terrorist attacks and it looks like a little tribute for the fighters who lost their lives during that attack.

On the flip side, the flashback sequence in the second half drags a little. But, once the flashback ends, the movie moves at an intense pace and ends on a high.

One of the biggest movie events of the year was unveiled for the public's viewing pleasure today morning. Arrambam, directed by Vishnuvardhan, has a lot going for it and has it satiated the appetite of countless Ajith fanatics? Right from frame one, it is clear that Ashok Kumar (Ajith) is a man on a mission and one who is hell bent on exposing the people behind an ugly scam and bringing them to book. He has his comrades who will go to any lengths for him and help him in his operation.

Director Vishnuvardhan, writer duo Subha and editor Sreekar Prasad have to be commended for managing to keep the audiences hooked to their seats for a majority of the movie with very few drag moments. With a running time of more than two and a half hours, the screenplay is taut and crisp enough to keep the crowd arrested.

The large mass of Ajith fans have plenty of moments to scream and whistle in delight. Ajith's screen presence is mighty as ever, and his classy salt and pepper looks and V neck T shirts suit his character's mean streak. The star's prowess at stunts and his knack of taking risks for the stunt scenes is all too well-known and when he dives out of a van onto an approaching car and zooms around in a Ducati, the entire crowd rises in unison to clap. Even some of Ajith's subtle gestures, his gait and his typical shades delight his fans. #behimdwoods.