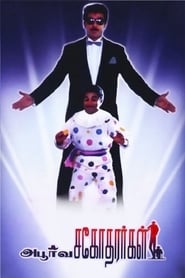 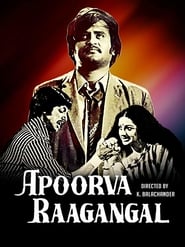 Appu and Raja are twin brothers who were separated soon after their birth. Years later Appu, a dwarf, has become a circus clown and is loved by everyone while Raja is a car mechanic. When Appu's love is rejected as he is a dwarf he tries to commit suicide. His mother comforts him and reveals to him that while she was pregnant with her twins their father Sethupathy was killed by four criminals Francis, Dharmaraj, Nallasivam and Satyamoorthy and also poisoned her which is the reason he turned a dwarf. Appu now decides to take revenge against the criminals but his lost twin brother Raja is framed for his crimes by mistake. Written by [email protected]

Appu and Raja are twin brothers who were separated soon after their birth. Years later Appu, a dwarf, has become a circus clown and is loved by everyone while Raja is a car mechanic. When Appu's love is rejected as he is a dwarf he tries to commit suicide. His mother comforts him and reveals to him that while she was pregnant with her twins their father Sethupathy was killed by four criminals Francis, Dharmaraj, Nallasivam and Satyamoorthy and also poisoned her which is the reason he turned a dwarf. Appu now decides to take revenge against the criminals but his lost twin brother Raja is framed for his crimes by mistake. Written by [email protected]

I saw this film first when I was a kid, Recently I saw it again, I had thought that it wont live up to the expectations from when i last saw it. i was wrong, the film is still top notch, the music is great, the editing is spot on, the songs hummable, and the action funny yet believable. Everything in this film is done properly, unlike some of the other films of that era, you feel the pain of appu, it was just great, not to mention it reminded me of my childhood! Most such films use little or no intelligence, surprisingly this film is very clever, the theme of revenge is central to the plot, but the comedy elements are present and fun to laugh at without becoming toilet humor. See this movie if you liked it initially, because it is still as good as it was back then!

Was a Phenomenon when released....It still is ....

For starters the hype was always there when Kamal makes a new movie and one where one of the lead actor is dwarf tops it. When it got released it was a trend setter for how movies should be made by actors who know how to relive a role. Well the whole plot and story might be a fiction but Kamal's acting as a serious dwarf working in a circus and happy go lucky automobile mechanic is pretty brilliant. Was one of the best movies in my list for close to year or more. Music which could be catchy even today. Had the VHS tape for a long time before lost it completely would love to have it on a DVD for a collectors copy. Not seen many Indian movies for some time now but if there is any movie with little bit of Kamal in it you can bet your bottom dollar I would give it a try. 10/10 for just the inventive plot and keeping the secret of creating the DWARF till date.

One Of My Very Favorite Kamal Hassan film.

The facial expressions Kamal Hassan gives throughout the film are phenomenal. He is a legend through and through and proves it here once again. I have seen many of his films: Hindustani, Chachi 420, Pushpak, Sadma, Velu Nayakan, Saagar, Ek Duuje Ke liye.....

As you can see, he has an impressive list of blockbuster film roles.

Plot: Sedhupathy (Kamal Hassan) is an honest and upright police officer. When he arrests four bigwigs Dharmaraj (Nagesh), Francis Anbarasu ('Delhi' Ganesh), Nallasivam (Nasser) and Satyamoorthy (Jaishankar), they escape justice easily and return to take revenge. They kill him and poison his wife (Srividya). She escapes and gives birth to twins with the help of another woman (Manorama) but the babies are separated and each woman believes that the other is dead because of the events happening next to birth. Raja (Kamal Hassan) grows up as a mechanic with Muniamma(Manorama) while Appu (Kamal Hassan), a dwarf, grows up in the circus with his Mummy (Sridvidya).

Appu falls in love with the daughter (Rupini) of the circus owner mistakenly thinking that she was asking him to elope with her. But she actually had asked him to be witness to her marriage with her fiancé, which was not approved by her father. Heartbroken over this and insecurity over his height, he tries to commit suicide but is prevented by his mother, who then reveals the reason that his dwarfism might have been because of the poison force-fed to her when she was pregnant with the twins. This leads Appu to learn about his father's murder and he decides to avenge by killing the four murderers.

Meanwhile, Raja falls in love with Janaki (Gautami) who happens to be Satyamoorthy's daughter. As Raja resembles Sethupathy, Sathyamoorthy and his 3 friends gain interest in Raja.

Francis is fishing in a lake. Appu uses one of his well trained circus Pomeranian puppy to lure Francis Anbarasu to an abandoned building and reveals his identity to him. Francis Anbarasu smirks when he sees that Appu is a dwarf and cannot hurt him due to his bigger size. But Appu uses a Rube Goldbergian contraption to kill him and the dead body falls in a truck covered with hay. Raja and Janaki have car trouble and hitchhike a ride in the same truck but are oblivious to the dead body. The truck driver discovers the body when he reaches his destination and calls the police. The inspector (Janakaraj) in charge of the case, suspects Raja by tracing the car number given by the truck driver.

Appu kills Nallasivam in a golf course using a tiger from his circus but Nallasivam's caddy sees Appu's face and the tigers tail from afar. This leads the inspector to Raja again who, coincidentally is wearing a tiger costume while performing a song at a festival in his street. Janaki becomes enraged when she learns that Raja has killed his father's friends and breaks up with him.

Raja is released from custody as the postmortem examination has revealed real tiger wounds that could not be inflicted by Raja's costume. He goes over to Janaki's house to smooth things over with the inspector following him covertly. When he is talking to her, Appu tricks Sathyamoorthy into killing himself with a circus hand gun that shoots backwards. Appu escapes but Raja and Janaki enter Sathyamoorthy's room hearing the gunshot a few moments before the inspector arrives. Janaki faints when she sees her dad dead and the inspector now believes that Raja had shot Sathyamoorthy. Raja too escapes and is on the run while the police had released a sketch of his face to the public. An exhausted Raja is spotted by some people in a market and they try to catch him. Raja, in an attempt to evade capture threatens to kill the nearest woman he gets hold of. When the crowd back down, he releases the woman and escapes. The woman, who incidentally happens to be Srividhya, realizes that Raja is the other twin and seeks out Manorama. They both realize that the murders are committed by Appu and Raja is mistaken as Appu, who overhears this. Dharmaraj believes that it is Raja avenging his father's death and that he is the next target, and decides to seek out Raja's mother and is shocked to see Srividhya, whom he believed to be dead, also present there. Nonetheless, he kidnaps both women and threatens to kill them unless Raja surrenders to him. Appu escapes and helps Raja evade the police and tells him everything. They both collaborate and go to the circus where their mothers are held captive. With the help of well trained circus animals, Appu and Raja overpower the goons. Ignoring his mothers call to stop, Appu kills Dharmaraj. Appu surrenders to the police and Raja is set free.

I don't remember watching it when I was young, but having watched it recently I probably can't describe in mere words how much I enjoyed it.

I am a great Kamal Fan. And every time he cries on screen he sure brings a drop from my eyes too. Especially in Apoorva Sahodarargal as Appu. The pain he suffers being a dwarf was touching. Especially in the Register office scene where he gets to know he isn't the bridegroom. He made the anguish look so real. This movie is still a mystery since know one knows how Kamal remained short and bent his knees ! The songs and Music are a sensation. Illayaraj is a pure genius.

Monorama's "Aiyo Aiyayoooo..." is hilarious. The dialogues from Crazy Mohan were as Crazy as ever.

Janakaraj and R.S. Sivaji combo is still remembered with the latter's lavish praise on the former. Nagesh deserves a note worthy mention.

Its a classic entertaining Kamal movie fare from the stables of Raj Kamal Internationals.