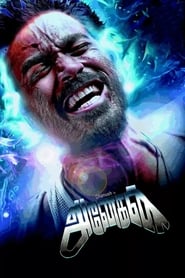 Madhu (Amyra Dastur) is a young game developer and she often gets weird thoughts about her past life, doctors call it as a illusion caused by her job stress while she believes in reincarnation. To Madhu's surprise, she meets everyone in her past life including Ashwin (Dhanush) whom she loved in her past life. Now the big question is, which part is reality and which is Madhu's imagination? Written by Joel Ajith

Madhu (Amyra Dastur) is a young game developer and she often gets weird thoughts about her past life, doctors call it as a illusion caused by her job stress while she believes in reincarnation. To Madhu's surprise, she meets everyone in her past life including Ashwin (Dhanush) whom she loved in her past life. Now the big question is, which part is reality and which is Madhu's imagination? Written by Joel Ajith

The movie revolves around a girl (Madhu), who remembers her previous births. In every era, there forms a love story between the lead pairs.

Director K.V. Anand had mixed the reincarnation concept with some commercial elements to satisfy the audience. The major positive of the film is its lead cast, the hype around the story and rich visuals.

Supporting actors, like Karthik, Ashish Vidhyarthi and Mukesh Tiwari have also done their part well. 'Danga Maari' song is the pick of the film and that would be a treat for the audience.

The negative sides are few. The flick resembles to be a modern version of yesteryear Tamil blockbuster film "Nenjam Marappathillai" and final moments of the film are quite predictable, alike all Tamil films.

Forget the negatives. Overall, the film gives you a little fantasy feel and unlike his previous flick, director K.V. Anand had concentrated well on the screenplay and mixed some moments of suspense to keep the audience engaged to this romance flick.

This movie is worth your money and time. Do watch it !

A very nice love story.A very well written script.Dhanush has four roles.He acted well in all roles.Karthik's role is a very different and nice one.Should not miss his role.Amyra dastur acted well.She has four roles just like Dhanush,and as a heroine,she has huge weightage in the film.Usually heroines just come and go,there isn't a big role for them.But this movie focuses on the heroine,because its a full love story,so this movie is for couples.I enjoyed the film.As a movie lover,i think that this is a very good film to watch.Watch it to "de-stress" yourself.A very nice romantic thriller overall.Third hit in 2015 after "I" and "Yennai arindhaal". 10/10. For ages 12+

I think Kv Anand can go behind the Camera rather than directing a film to spend some valuable cash bundles. This is really a horrible movie from the start to end. I don't understand what obsession he has behind the medicines and some overtly intelligent heroes.

*Storyline: I think the story line is a good choice for a fantasy type celluloid but completely failed as a film in the making and a cruel letdown by the amateurish screenplay.

*Acting : Poor choice of heroine, who doesn't know what the heck acting is??. Not even a lip sync is worked for her. This movie just got buried its ashes because of her acting. Unfortunately the roles played by Dhanush which never fits the bill. Not an impressive work from Karthik but an OK for a role like this.

*Direction: Amateurish. No proper paperwork and sketches for each characterization played there. A complete Dejavu from his previous movies.

*Music: 1) Songs: Complete Dejavu (Harrish Jayaraj lost his essence for quite a long ago). Yes Dangamari is enjoyable to hear but seriously horrible to watch. 2) BGM: Poor throughout the film.

Final Verdict: My 150 bucks gone just like that and I wasted my 3 hours for some garbage.

To Producer: You can check some budding short film directors. They are very much impressive and extremely cost beneficiary.

Accept the movie's premises and enjoy

I'm quite surprised that this movie hasn't got a higher rating on IMDb. Anegan showed me how well Dhanush can act. His modern day persona Ashwin fell a bit flat for me, perhaps because character-wise he's the dullest and there isn't much character development, but Dhanush's portrayals of Murugappa and Kaali were fantastic.

I wish the female characters were stronger. Actually, they're far from weak personalities, yet we're not shown how their strength of character carries over outside the realm of finding their soulmate and never letting them go. Amyra's character is a perpetual damsel- in-distress needing Dhanush's character to take care of her. That said, I think Amyra delivered excellently.

Aside from a few unanswered questions I have (deleted scenes seem to provide some answers) and a little salt for the extra implausibility of villain's demise in the end, Anegan was beautifully shot, well executed and very entertaining!

Update: I revisited the film and feel I have to mention that Anegan has great supporting characters. And, I can't get the soundtrack out of my head.