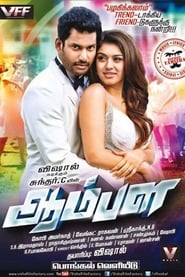 Saravanan (Vishal) is a jobless, carefree easy-going Mr Nice Guy who falls head-over-heals in love with Maya (Hansika). Saravanan's father Aalavandhan (Prabhu) narrates his son a flashback on why he and his wife got separated, also conveys his wish on re-uniting with his sisters' family and for that his sons should marry the daughters of Aalvandhan's sisters (Ramya Krishnan, Aishwarya and Kiran Rathod). Incidentally, Maya is the daughter of Ramya Krishnan and the rest of the story tells us whether both family reunite again or not. Written by Raj Sundar

Saravanan (Vishal) is a jobless, carefree easy-going Mr Nice Guy who falls head-over-heals in love with Maya (Hansika). Saravanan's father Aalavandhan (Prabhu) narrates his son a flashback on why he and his wife got separated, also conveys his wish on re-uniting with his sisters' family and for that his sons should marry the daughters of Aalvandhan's sisters (Ramya Krishnan, Aishwarya and Kiran Rathod). Incidentally, Maya is the daughter of Ramya Krishnan and the rest of the story tells us whether both family reunite again or not. Written by Raj Sundar

I watched this movie with my family, and I was never bored for a second. Right from the beginning, you know Aambala is that family movie that can tick all (or most of) the boxes on your checklist. Lots of comedy? Check. Action-packed fight sequences? Check. Catchy songs? Check. All-star cast? Check. I can go on and on about the awesomeness of this movie, but some of you don't have the time to read all this, so to summarize the movie...

1. Sundar.C's direction. The moment you see his name on a movie, you can expect lots of comedy and family entertaining elements in that movie.

2. Santhanam and Sathish's comedy. Both comedians can deliver hilarious punch dialogues and work well with their co-stars.

3.The cast. Vishal and Hansika are in their top usual form. Vishal as the somewhat serious, somewhat awkward type of guy and Hansika as the cute and bubbly girl people enjoyed seeing in Theeya Velai Seyannum Kumaru. Sometimes, however, their co-stars like Prabhu, Ramya Krishnan, Vaibhav Reddy and others steal the limelight.

4. Hip Hop Tamizha's music. The hip hop songs and background music (bgm) keep the movie alive and vibrant. I loved all the songs (especially the 'Inbam Pongum Vennila' remix). In fact, I may have to write a separate review just to explain how AWESOME they are. A brilliant effort for a debut music director. I'd say he could be the next Anirudh Ravichander.

1. Sometimes, Santhanam's and Sathish's comedy don't deliver. But, hey, not every joke can be a winner.

2. Some may regard this movie as clichè. Frankly, this isn't supposed to be an award winning movie. It's a masala family entertainer.

A marvellous effort from director Sundar.C. And a must watch for those of you who are bored or looking for a good comedy to watch. And parents, want to give your kids a treat? Then , this is your movie. I guarantee your kids will thank you for letting them watch this. And, I also guarantee you will not feel bored too.

Plot:- Vishal finds his father and brothers from whom his mother kept him away; Once after he meets his father Prabhu, and his brothers Satheesh and Vaibhav, Prabhu insists that they must marry the 3 daughters of their 3 Aunties and unite their families; How Vishal wins the hearts of his aunties is what Aambala is all about.

Positives:- It is a typical Sundar.C movie portrayed in Hari's style; Generally, Sundar films are all Power-packed comedy entertainers; Aambala too delivers the same effect throughout the film; There is nothing great about this masala flick but it has a lot to laugh; Santhanam is back with his comedy one-liners and he makes the whole theater into a laugh riot; Vishal delivers a decent performance and he has some scope to show his mass; Everyone in the film has done a decent job; HipHop Tamizhan BGM is good.

Negatives:- As usual the film has same Sundar.C type story; It has a theft/heist scene which is very usual in most of his films right from Ullathai allitha, Winner, Kalakalappu and once again in Aambala. The fight sequences are ridiculous and it makes the film look like a Scoop movie. This is not a dream debut for Aadhi as Music Director since all the songs are boring except "Pazhagikkalam". Vishal's dance moves are very hard to watch since the choreography is poor. Especially in Aye Aye song, Vishal finishes a step once after all the co-dancers finishes them;

Bottomline:- Aambala is not an excellent film but if you are a fan of Comedy Entertainers, 2;30hrs of Entertainment is Guaranteed in Aambala.

Verdict:- Leave your brains aside and Enjoy Aambala. Rating:-6/10

Why all the hate,it's a complete laugh riot.

This movie's rating is 4/10,I can't believe this.This movie is one of the funniest Tamil movie's released in recent times.The story is not new but differently told,we cannot know what to expect from the start.This is one of the few movies which I was laughing the whole movie even till the last song number.Vishal and Santhanam's combination was perfect enough to just give us some of the funniest moments ever seen in Tamil cinema.Supporting characters including the villain did tremendous jobs that made us add to the laughter.The action scenes are well choreographed and suited the genre of this film,really fun.Overall this movie is just a really good summer entertainer for your,not the best,but certainly never seen this funny before.Watch it,see if you believe me,you'll know.