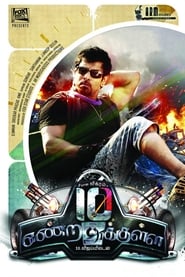 Vikram is a remarkable driver, who is able to do the incredible in just ten seconds. He is a complete stranger that his name remains unknown even to his close associates. As he is a transporter, he prefers to introduce himself with different names like James Bond, Kamal Haasan, Mani Ratnam. When Vikram meets Shakeela (Samantha), his life turns upside down as she is wanted by the most deadly terrorists in Uttarkhand. Why are they in search for her? Will Vikram save her life? Written by Vijay Kumar

Vikram is a remarkable driver, who is able to do the incredible in just ten seconds. He is a complete stranger that his name remains unknown even to his close associates. As he is a transporter, he prefers to introduce himself with different names like James Bond, Kamal Haasan, Mani Ratnam. When Vikram meets Shakeela (Samantha), his life turns upside down as she is wanted by the most deadly terrorists in Uttarkhand. Why are they in search for her? Will Vikram save her life? Written by Vijay Kumar

Another Commercial movie of Vikram

I haven't seen this bad movie of vikram in years..This movie is just like a spoof of Transporter series. To begin with,this movie starts by exaggerating Vikram's character of the work he does for a living. This movie has once again proved that commercial movies in Kollywood still continue to exist. Then there was this heroine samantha's character which was bought to expand running time of the movie.It kept the audience waiting that there was something bigger on the other end kept for them but only to be utterly disappointed. The fight sequences were not very impressive either and the movie was way too predictable to be frank. We just had to sit through it like something was gonna come up at the end. So , I would suggest this movie only if u are new to commercial masala movies and want to waste your time and money.

Its Nepal, not Uttarakhand(North India)

I watched hindi dubbed version of this movie "Dus ka Dum". I was annoyed hearing Nepal called as part of North India. I would like to suggest the makers of this movie to atleast acknowledge all that those scenes were from Nepal and not from North India.

10 endhradukulla is a tamilized version of transporter. It starts uninterestingly, gets interesting in middle again gets boring and ends in a passable note. Vikram was very cool and stylish. Action scenes were well choreographed and story was good enough to make a commercial entertainer. But the dull script and poor character development fails its experience. Samantha performs bad as usual. Another misfire from vikram.

Actor Vikram took everyone by storm with his record shattering performance in his previous film I (2015). Even I liked the film and his performance very much, and waited for another power packed film from him. When I saw the promo of 10 ENDRATHUKULLA, I had realised that this would be perhaps the kind of action entertainer I had been looking for since a long time. And finally, I got to watch it (the original print, not the pirated one) with English subtitles, and enjoyed it thoroughly.

10 ENDRATHUKULLA is an adventurous action film that is full of action, comedy, drama, romance and fast paced and well placed thrills. The film is a journey on which everyone would like to go. Actor Vikram is once again in his usual powerful form. Be it the action, comedy, or the emotional sequences, he delivers as usual. His role is not as heavy as Anniyan (2005) and I (2015), but this young character is perhaps the biggest reasons to enjoy the film, besides its other factors. In other words, Vikram rocks in a role of a young, rough and stylish action hero. Samantha is good. She has an equal share of the good performance factor as Vikram. The lead pair's chemistry is good and keeps you hooked. Pasupathy is good and his acts evoke laughter at times. Abhimanyu Singh does his usual best in his role. Others do their respective parts well.

The music is good and thoroughly enjoyable, but the duration of a few of them except the Vroom Vroom song, could have been reduced. The story and screenplay is good and full of masala enough to hold your interest. The cinematography on beautiful locations is handled well. The fight scenes are completely spellbinding. I loved the fight choreography very much and it suited the flavour of the film very well. Very excellent, stylized and executed in a terrific way with appropriate use of VFX, the fights are the biggest plus point to watch this cool film.

The film has some mild negatives as well. The film's pace is good, but a few scenes could have easily trimmed. Also, the VFX, though good for the most part, sounds bleak in a few parts. Scenes like dragging a man, heroine jumping with a car are the only two shots with such a problem. Otherwise, the VFX is acceptably good. The interval blockade is though good, yet it isn't made too sharp to give the feel of it. But the overall impact of the film overshadows these mild negatives.

Overall, 10 ENDRATHUKULLA is a solid action entertainer that is a must if you are a Vikram fan, as well as an action lover. Even if you like films with a good storytelling, don't wait. Just go and watch it in high definition, for the film is visually so crisp that you won't like to miss any single part of it. A must watch!